Canada is only one country of many in Kinga’s world travels.

For most people, a long ride might last a weekend, or even a month. For Kinga Tanajewska, the ride began five years ago, and it doesn’t seem to be winding down anytime soon. Born in Suwalki, Poland, Tanajewska got her first motorcycle after graduating high school. It was a Honda CB450 Nighthawk she received as a gift from her parents. She eventually moved to Sydney, Australia, where she bought a new BMW F800GS and toured the country for the next two years. Unfortunately, a head-on collision with a car in 2015 destroyed that bike. Tanajewska was lucky to get away with only a few broken bones. This didn’t put a damper on her desire to travel, and she immediately bought another new F800GS, which she affectionately named Chillie.

In 2017, Tanajewska decided to really hit the road. She quit her job as an engineer for a construction firm and left Australia for a round-the-world tour with Chillie. She hasn’t been back since. Thus far she has travelled through Kazakhstan, Tajikistan, Mongolia, Russia, South Korea, Jordan, Iran, Israel, Ethiopia, Egypt, Sudan, and throughout Europe, among many other countries. 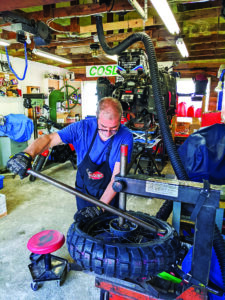 In May she arrived in Canada with plans to ride across the country from west to east, before turning south to tour the United States. Unfortunately, some of the stamps in her passport were from countries that prevented her from getting the necessary visa to enter the U.S. Her new plan was to tour eastern Canada (since her bike had arrived in Montreal by ship) while she sorted her visa, and then tour western Canada before finally going into the U.S.

Since she would be coming to Montreal to collect Chillie, a friend of mine put her in contact with me to possibly lend a hand, which I did gladly. We picked up her bike at the customs broker, and returned to my place, where Tanajewska stayed several days to sort a number of things, including insurance, a tire change, and a quick check up of Chillie, before heading east into the Maritimes.

When partaking in an epic journey such as Tanajewska’s, you can’t just take your motorcycle for granted, especially since most of her travelling has been off road. When living on the road, your motorcycle essentially becomes your home. There’s a lot of preventive maintenance to perform, mitigation of potential crash damage, and electrical outlets and luggage to install.

Tanajewska documents her travels and posts regular updates on her website, onherbike.com. She also has several sponsors that provide the various gear she needs. She’s also giving back to the community by raising money for a good cause. Along her travels, Tanajewska raises money to help take care of Franek, the young son of close friends, who has been diagnosed with cerebral palsy.

One thing I noted on Tanajewska’s bike is the extensive use of soft luggage. While aluminum cases seem solid, and they certainly give the bike a ready-for-adventure appearance, they’re actually prone to damage in a fall. 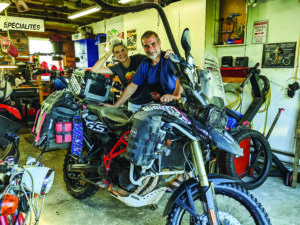 Lone Rider provided the semi-rigid MotoBags saddlebags, which have a soft, rip-resistant waterproof outer shell, mated to a rigid aluminum back and mounted solidly to dedicated saddlebag mounts. These offer the versatility of hard cases but are totally waterproof, and as Tanajewska has found out on many occasions, they hold up well in a fall. In fact, in really tight situations she will lay the bike on its side and pivot it to change direction before picking it up again, and the bags have held up well so far. She does have an aluminum BMW top case, but it’s not prone to damage in a tip over.

One item that has proven indispensable in remote areas is the Camel Tank auxiliary fuel tank mounted to the right rear of the bike. It is made by a company located in Calgary called Camel ADV Products, and it contains seven litres of fuel. It transfers fuel via gravity, so it doesn’t need to be wired to the bike. A few crashes over the years did cause a leak to form at a structural point, though, so I replaced it, which took about an hour. The only problem Chillie has experienced in 120,000 km of hard riding is a worn-out starter clutch, which has since been replaced.

There’s a long list of tools that Tanajewska carries, as well as some spares, a flat repair kit, and a compressor. Unfortunately, somebody robbed most of her equipment and tools while the bike was parked in Moncton, NB, but as soon as word got out, people in the community donated a bunch of stuff, including a tent, sleeping gear and tools, so she could continue on her journey.

And continue she will. From here she heads to the west coast, and then she turns south. If you cross Tanajewska on the road, please tell her I say hello.