A brief history of the Indian Scout, culminating with the three year run of the 1928 Model 101.

A conservative but astutely managed Midwestern company, Polaris’ management today could hardly be more different than the bunch of spivs who ended up running the Indian Motocycle (sic) Company into the ground during the 1910s and 1920s. For after gradually reducing his slice of Indian equity as new investors were brought in to underwrite the company’s growth, co-founder and chief engineer Oscar Hedstrom had deserted Indian in 1913 – the year in which the company made more than 30,000 motorcycles, the most in its entire history prior to Polaris acquiring the marque in 2011.

Hedstrom was horrified at the now-illegal-but-then-permissible actions of Indian board members to ramp up the company’s stock values so as to make a financial killing, with his equally outraged co-founder George Hendee following him in 1916. That was the year a star Indian model was introduced, the legendary Powerplus, whose side-valve 61 c.i. (990 cc) 42-degree V-twin engine designed by Swedish immigrant Charles Gustafson Jr.

was both more powerful and quieter than rival IOE (intake over exhaust — a.k.a. F-head) models, remaining in production with few changes until 1924.
Indian used the Powerplus as the basis of the 41,000 military bikes it produced under fixed-price contracts for the U.S. government from 1917-1919, a deal that turned sour for the company as raw materials escalated in price, while its dealers were left with limited stocks, so that more profitable retail sales dropped significantly. Its Harley-Davidson rival, by contrast, made just 15,000 army bikes for U.S. Armed Forces during the 18 months of U.S. involvement in the First World War, but during wartime continued to nurture the civilian market, which Indian had essentially abandoned. 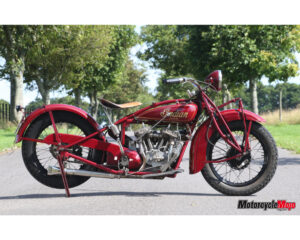 This flawed strategy left a cash-strapped Indian with a postwar mountain to climb commercially which, together with a corporate reorganization, it succeeded in doing thanks mainly to the genius of Dublin-born ex-electrical engineer and racer Charles B. Franklin, Indian’s Chief Engineer from 1920 on. Franklin had succumbed to motorcycle fever in 1903 when he began a racing career which culminated in finishing second in the 1911 Senior TT, the first to be run over the Isle of Man’s full 37.73-mile Mountain Course, behind his fellow Indian rider Oliver Godfrey in a 1-2-3 finish for the American marque’s bikes.

The previous year he’d resigned his job as an engineer at the Rathmines Power Station in Dublin, and set up his own Indian dealership in the Irish capital. There, he worked on tuning and racing Indian motorcycles, and in…