Inspiration can come from many sources, what you do with it is up to you.

Marrying Japanese components with Harley-Davidson technology, builder Marco Luk of Calgary has turned out a unique custom machine. While the Shovelhead engine is the most easily identifiable component, literally everything else has been fabricated or heavily modified. And, as I once overheard someone say about the bike while it was on display at a local motorcycle show, “Everything about it just screams ‘suicide’.” That was one reaction, but the bike has been built to ride safely and reliably.

However, it’s far removed from where Luk got his start.

An angle grinder, a used MIG welder and a socket set, wrenches and screwdrivers purchased on sale at Canadian Tire were the tools he used to build his first custom motorcycle. It was 2011, and he’d spent the previous decade obsessed with skateboarding. If he hadn’t been skating, he might not have become aware of the custom bike scene thanks to hardcore skaters and motorcyclists such as Max Schaaf, Jason Jessee and Jasin Phares. It didn’t hurt that one of his musical heroes was heavily into motorcycles. Paul Simonon, bass player for the punk band The Clash, was a motorcyclist and wore the black leather jacket and engineer’s boots with aplomb.

“I really think I got interested because I’d see these cool figures who were into skateboarding or in the music scene with motorcycles, and I’d think, ‘Ah, that looks so cool,’” Luk says about his fascination with powered two-wheelers. “It was a golden era of skaters and their motorcycles, and I just found it hard not to be inspired by it.” 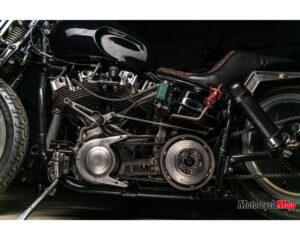 Luk’s first machine was a 1977 Honda CB750F. Over the winter of 2010 and into the spring of 2011, working in his mom’s unheated Edmonton garage, he used his meagre assortment of tools to build a rather wild-looking brat-style custom. It was raw, but it also had a timeless style with a menacing stance that continues to resonate with Luk.

To disguise the CB750’s Comstar mag wheels, he covered them with modified pizza pan covers. The year he finished this build, Luk moved to Calgary and continued to pour the same amount of energy and intensity into building bikes as he had perfecting tricks on his skateboard.

Although the first iteration of the CB750 was difficult to ride and the engine eventually seized, he learned from some of his mistakes and built another machine, this one a Honda CB500T. A mentor through this stage of his building career was his roommate Shawn Britton of…