Sophisticated and docile — that is, until you grab a handful of throttle.

The first thing that comes to mind when motorcyclists start jabbering about Kawasaki’s Ninja H2 is, without a doubt, the supercharger. Never once, for instance, has a discussion about the SX SE — the supposedly sport touring version of the supercharged H2 — started with “How about those saddlebags, eh?” Or the brakes. Almost assuredly not the seat, TFT gauge set or the comfy, supple suspension. It’s always the supercharger.

It’s easy to understand why. For one thing, superchargers on motorcycles are rare enough,: a quirk of past racing rules saw their use on some pre-war BMW and AJS racers. And I think I remember reading there was a Vincent Black Lightning once that was similarly “enhanced” with a belt-driven supercharger. But, as far as I know, Kawasaki is the only company audacious enough — that could also be read “demented enough” — to install one on a production bike sold to, you know, common folk. 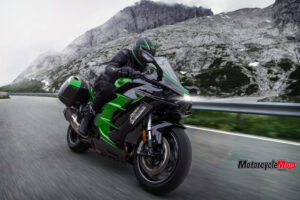 Then there’s the whole 197 horsepower thing, not to mention the attendant 101.3 ft-lb of torque. Yes, I know, the H2R is good for 300 or so ponies which makes the SX SE the detuned, skinny little brother. But for most of us, the thought of the SX SE makes one think of a World Superbike racer, only one with saddlebags and cruise control.

Ride the thing and that is not, however, the first impression you’ll be left with. As soon as you hit the H2’s starter button — long before you’ve twisted the throttle in anger — comes the surprise. Rather than the malicious animal that those 197 horses and supercharger imitate, the H2 — at least this H2; I have not ridden the “R” — is as docile as a newborn lamb.

It idles like a pussycat, sups on 90-octance gas without puking pistons and, more incredibly, is one of the smoothest — if not the smoothest — of inline fours. It is truly uncanny to putter around on a bike you imagined to be barely harnessable and realize that, as much as the 197-hp might be the headline, its sophistication is the real story. So smooth is the 998-cc four, in fact, that my Dainese Smart Jacket, which uses engine vibration to wake itself up from “sleep” mode, would often shut down at stop lights because, well, the big Ninja wasn’t producing enough of said vibration to keep it alert.

Even when riding — at normal speeds at least — the engine is a big teddy bear. Yes, there’s 101.3 ft-lb of torque available, but at low speeds, the engine is in no way over-wrought. If anything, the addition of the supercharger has smoothed out the big Ninja’s powerband, its throttle response…