Planning and budgeting to become a safer rider.

I was surrounded by eight police motor officers with the red and blues on their motorcycles flashing. I wasn’t the reason they were there. But I was the reason their lights were flashing. On a street ride during the 10-day Police Motor Officer Certification course I was taking with them, I failed to negotiate a tight, uphill, 120-degree left turn into a narrow country lane. When I realized I was going wide, instead of looking into the turn and countersteering, I focused on the edge of the road and soon found myself in the grassy ditch.

The first officer asked me if I was hurt. I wasn’t. The second officer asked if the bike was okay. It was. The third officer commanded: “Then get off your ass and get your bike up; you’re blocking traffic.” I did.

Just weeks before, I had been on a one-day off-road course on a 250 cc Yamaha. I was taking on tricky, hilly, technical single track, and I didn’t have a problem. But for this course, I was on a rented BMW 1200GS.

This mishap taught me three things: I really needed the training I was taking (at the time, I had just come back to riding after a long hiatus); size does matter (I’m positive I would have made the turn on the 250); and having good riding gear can help to keep you from getting hurt when you go down. 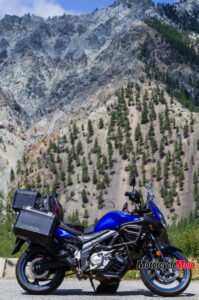 In a YouTube video, a 30-year-old man buys a Harley for his dad — a newer version of the one he rode thirty years before. It’s a sweet gesture. His dad takes it for a spin and says “Heh! It’s just like riding a bicycle.”

Motorcycle fatalities have increased. What might surprise you is who is crashing. According to data collected by the Insurance Institute of Highway Safety/Highway Loss Data Institute, in 2008, the age group with the highest number of rider fatalities switched from riders under 30 years old to riders over 49. This trend continues today. Guess what age group the aforementioned dad fits into. It was, incidentally, the age group I was in when I returned to riding some years ago.

The training recommendations for California motor officers state that motorcycle skills are perishable. Despite riding 24/7/365, motor officers in California are mandated to take ongoing rider training. When we return to riding after winter, our skills have suffered. If we return after a long hiatus like I did, our riding skills have suffered a lot. So no, it’s not just like riding…