Some tools actually do work as promised.

Seldom do time-saving tools actually, well, save time. Legion, in fact, are the bobbles I have laying around the Booth garage gathering dust in their uselessness: at least three chain alignment tools, two more gizmos that supposedly take the guesswork out of measuring chain slack, and one doohickey that promised to make adjusting the valves on my beloved Honda CB1100RC easier, but just ended up grinding itself into little shavings in my oil. We were not amused.

Motion Pro’s latest cable lube tool — official name: the Motion Pro Cable Luber V3 — is the polar opposite, a simple little gadget that not only works better than you’d think but is also super-simple to use. 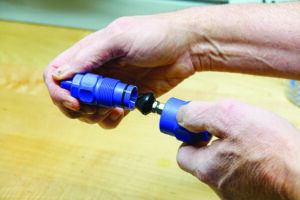 Essentially a three-piece tool — the two halves of the body you can see, and a cone-shaped rubber grommet inside — you simply push the lower half over the cable, install the cone-shaped grommet around the cable’s sheath and then screw the top half of the body back on, creating a completely sealed container that shrouds the opening to the cable. Then, you take a can of aerosol cable lube — don’t use chain lube; buy the Motion Pro lubricant specifically tailored for cables — insert its tube into the little hole in the upper section’s plunger and then spray on, McDuff!

The Cable Luber — remember to insist on the third-gen version — quickly fills up with lubricant and then it’s simply a matter of holding your thumb over that hole in the plunger and then pushing down. Since the Luber tool is a sealed unit — the two halves screwed together and the rubber grommet sealing the cable itself — the oil is force fed through the entire length of the sheath.

This last action is truly the best aspect of the V3’s abilities, with the thumb and plunger creating enough pressure in the cable for the lubricant to literally jet out the other end of the cable, taking with it all the detritus and debris that has been making your clutch cable so stiff. I found two doses ideal: one Cable Luber full of oil to blow out all the crap, followed by a quick refill to squeeze in fresh, clean lubricant and your clutch action will be as good as new.

And it really is (almost) as simple as all that. Oh, the inner grommet can be a little fiddly to get over the cable’s outer sheath, and getting the aerosol can’s tube into the plunger’s little hole takes a bit of patience. But even in a worst-case scenario, we’re talking a five-minute job here, with enough leeway to sneak in at least two solid slugs of Bud. If your motorcycle has a clutch and/or throttle cables, the Cable Luber V3 is totally worth the $30.99 asking price.