Forty years ago, my friend Bart and I roamed the highways and by-ways of Europe from the Netherlands on our Norton Commandos. We rode to London for bike parts and to France and Spain for the sunny beaches. Those days were some of the best times of our lives. Later, we grew apart, but maintained occasional contact.

It was after my wife and I immigrated to Canada that Bart and I started contacting each other more frequently. In 2019, during a visit to the Netherlands, we started talking about riding together again. Destination Canada of course. Dreams became plans and, in January 2021, Bart bought a Kawasaki KLR650 in Canada for the backroads trip through Alberta and British Columbia we had in mind. After some modifications to the bike, it was ready for the adventure. A 3,500 km
backroads route was planned with Gaia GPS.

Our plan was to leave early August and ride for about three weeks. Unfortunately, the borders were closed for foreign tourists because of the pandemic. When the border finally opened on September 7, it was too late for our adventure.

Another summer without riding together. Bart took his Norton to Portugal while I decided on doing the Alberta part of the backroads trip. Aside from the enjoyment of the ride itself, it was also an opportunity to get to know the Gaia GPS navigation system. 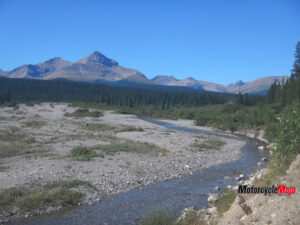 I set out from my home in Sandy Beach, Alta, on August 12. The first leg went southwest through the scenic lake area of Lac Ste. Anne county via Drayton Valley to the Brazeau Reservoir. The first stretch was highway, and the adventure began when I turned onto the gravel of the Powerhouse Road leading to the reservoir. The ride along the reservoir provided stunning views over the vast body of water.

The connecting trail from the dam to the Elk River Road proved to be more than I wished for. It took 1.5 hours to complete an 8 km section through forest and marshland, which was still wet and muddy even after a very dry summer. The plan was to camp at the Pembina Forks campground, but the delay meant I ended up at the Elk River campground, a beautiful spot nestled in spruce trees with the Elk River flowing in the valley below.

The next day started early after a well-deserved sleep. The skies promised another sunny day. Heading west on the Elk River Road, I turned south at Pembina Forks and, after 10 km of gravel, I found the turn-off onto the Grave Flats Road. The scenery became more beautiful as I travelled further west toward the east side of the Rocky Mountains.

At one point I passed through…