This riding attacks your senses from all directions.

Red sandstone cliffs trimmed with green falling into the blue waters of the Atlantic Ocean was my first peek at the archipelago, as the ferry nosed its bow into Cap-aux-Meules harbour. Les Îles de la Madeleine (Magdalen Islands) consists of 12 islands, six linked by long, narrow and very fragile sand dunes. This small, isolated region of Quebec lying within the Gulf of St. Lawrence is a 105 km, five-hour ferry trip from Souris, Prince Edward Island.

It was with anticipation that we rolled out of the hull of the Madeleine II onto Île du Cap aux Mueles and headed out to our campsite at Parc de Gros-Cap before unloading my wife’s Suzuki TU250 from its front hitch mount on our camper truck. It was later in the evening, so we had to wait until morning to begin our riding adventure. But before heading to bed we savoured our first local fresh island lobsters and mussels, washed down with a chilled bottle of cold Sauvignon Blanc.

Tearing Up the Archipelago 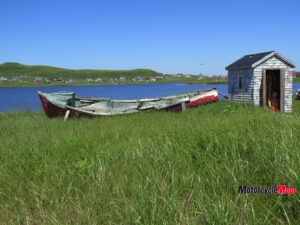 The next morning, we donned our riding gear, checked the map and planned how to experience everything the islands have to offer in just three full days. The map showed that the islands, shaped like a large fishhook, stretched out 88 km in a south-west to north-east direction.

A motorcycle story typically has a start off point and an end destination with descriptions of roads, views, eateries and adventures along the way. But everything is different on the archipelago. Our camp was set up in a central location and my memory of our daily rides was a kaleidoscope of spectacular ocean views, not only ahead, but many times on both sides as well as in the mirrors.

But when an island was wider, other fascinating scenery included unique, quaint, colourful Quebec-inspired houses nestled in small villages or strung across green valleys and hills within the island’s interiors. The rapidly changing scenes flashed by on every stretch and every corner.

The expansive ocean waters, shimmering in multiple variations of blue, framed the steep redstone cliffs, which rose from white sand beaches on one side while the lush green valleys of the island’s interior framed the other. If motorcycling could ever be called serene, this is where you will find that Zen-like serenity.

Quebec Route 199 runs from one end of the archipelago to the other, traversing each of the very unique connected islands. The main island, Île du Cap aux Meules, where we set up our camp, is the administrative centre of the islands, and has schools, the hospital, the fire station, the thermal power plant and most of the commer…