Home / Issues / January/February 2023 / The Prairies are NOT Boring

There’s plenty to keep the rider occupied while crossing the Prairies.

“Are you going to fly your bike to Alaska?”

I had encountered the question more than once in the days leading up to my 2022 summer adventure, and it betrayed what many Canadians believe to be true: The prairies are so boring! The sentiment is often accompanied by the now-standard joke about watching your dog run away for three days. Not to be too Zen about it, but motorcycles have taught me that, in fact, the journey is the destination, and I was looking forward to the open skies and endless horizons. This was part of a long-term test ride of the new 2022 Suzuki V-Strom DL650XA, and along with taking note of Suzi Blue’s performance and ergonomics, I was determined to make the most of every moment and every kilometre.

It was the summer solstice, and I rolled out of my bivy to a golden dawn in Steinbach, Man., the de facto centre of a Russian Mennonite population that had arrived as refugees from Ukraine beginning in the mid-1920s. Their heritage is rooted in the 16th Century Protestant Reformation, a renunciation of the perceived corruptions of both the Catholic Church and the larger world — a position that naturally led to conflict and even martyrdom. And while such conviction can also lead to zealotry and extremism, as I toured the Mennonite Heritage Museum on the edge of town, I had to admire a movement centred on principles of benevolence, simplicity, and non-violence.

As if to foreshadow my approaching destination, dark clouds began to roll in along Highway 1. After stopping for a selfie in front of a sign announcing the Longitudinal Centre of Canada (96° 48’ 35”) and — in keeping with a theme — being pummeled by a downpour of Biblical proportions, I rode into downtown Winnipeg. 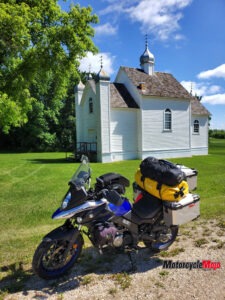 Winnipeg was the last place I had expected to perform a water crossing, but Suzi and every other vehicle crashed through water running in the streets well above our rims. Mostly, I felt chagrin for the farmers of the province. The flooding of nearby Morris had made national news, and fields were still underwater. I began to wonder if wheat growers were telling themselves it was time to try rice. The trouble, of course, was that the previous two summers had suffered severe drought.

“This is still better than that,” an old farmer told me over lunch. “Last year the water table was down 14 feet.”
My destination was the new Canadian Museum for Human Rights, where my son-in-law’s grandmother is one of many holocaust survivors telling their stories on a wall filled with video screens. More than once I…