Riding in one of the most spectacular places on earth with Edelweiss Motorcycle Tours.

Norway is one of those places that, I think, judging from those I’ve spoken with, is a destination on most people’s bucket list. The appeal is the rugged Nordic landscape and out-of-control scenery, the fjords, and its ancient history. For me, a trip to Norway is one that I’ve waited a long time to come to fruition.

My reason for being here was to participate in an Edelweiss motorcycle tour, aptly called the Viking Experience that ran from Alesund to Oslo. The night before the tour started, I met my fellow travellers at the first night’s hotel, where we also met our tour guides, Angela and Arild. Both are highly experienced in their field, with many years guiding guests in many parts of the world with Edelweiss.

My regular ride at home is a BMW R1250GS and, while BMWs are the bike of choice for many tour companies, on this trip I chose to ride a Honda Africa Twin 1100 — why ride the same thing that I ride at home? With the exception of a Ducati 950 Multistrada, every other rider chose the 1250GS as their ride for the tour, and for good reason. It’s an exceptional touring bike.

I researched some of what to expect during my time in Norway, but as it turns out, I really didn’t need to spend much time searching for information as Edelweiss sent its tour participants a very complete 68-page tour booklet describing all aspects of the country, from road and traffic rules to currency and history, expected weather and the type of clothing to bring — just about everything a person would need to know when going to a foreign country.

Switchbacks at Every Corner 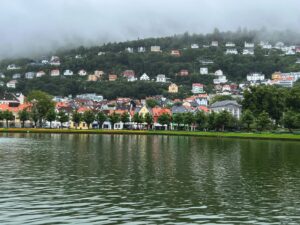 Hairpin turns are something you can’t properly practice to any degree in Canada. Of course, you can practice slow-speed turns till the cows come home in an empty parking lot, which I did the day before leaving for Norway, but it just isn’t the same as ascending or descending a mountain road while staying in your lane to avoid oncoming traffic. And if that traffic happens to be a full-on luxury passenger coach, then you’d better be looking through the turn — almost backwards — and taking appropriate action, because there is no way a motorcycle is going to win that battle. It’s quite a sight to see the bus drivers navigate these corners. Sure, there are hairpins sporadically located in Canada, particularly in the mountains of B.C., but not to the…