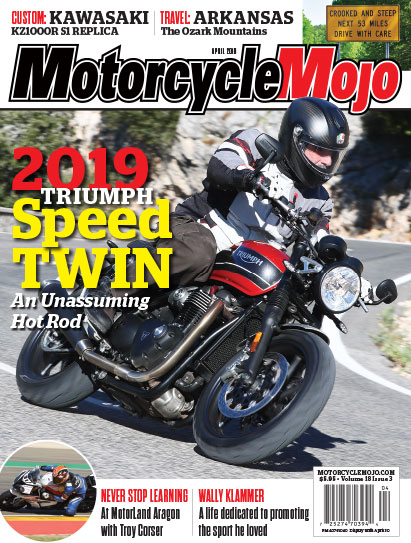 Triumph has once again upped the ante in the unassuming hot rod department by releasing the Speed Twin, a Bonneville-based motorcycle using a high-performance 1,200 cc engine with Thruxton tuning, but less weight than the Thruxton. If you find the Street Twin too mild-mannered but the Thruxton’s riding position too aggressive, this could be the bike for you.

Life is a learning experience, and even professionals can still acquire new tricks. California Superbike School instructor Misti Hurst becomes a student again at Spain’s MotorLand Aragon and participates in the Race Academy taught by Troy Corser. She shares her new-found tricks with our readers.

Have you ever wondered what it’s like to ride in the Ozark Mountains of Arkansas? Jeff Davison tells of his experience riding the never-ending twisty roads west of Memphis and Little Rock.

Do you remember the first time you saw the Kawasaki KZ1000R Eddie Lawson Replica? Steve Willgoose does and he’s dreamed of the bike ever since, so he set his sights on recreating the legendary 1982 KZ1000R S1. The build and his attention to detail are described in the article “Period Correct.”

We also bring you the story of British Columbia’s Wally Klammer and how he dedicated his life to promoting all genres of motorcycling. And in the article “Motorcycle Meditation,” David G. Williams describes how he gets away from it all when life throws him a curve ball.

All this and so much more in the April issue of Motorcycle Mojo.