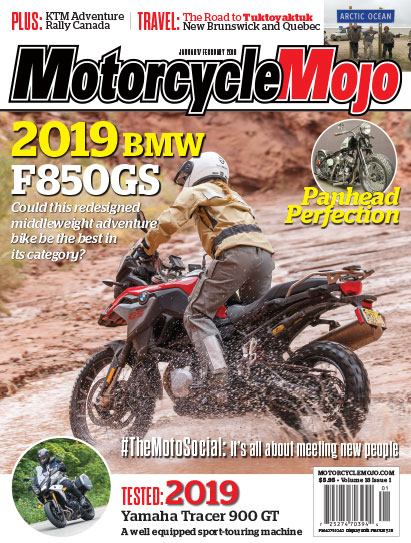 BMW released its new F750GS and F850GS, and Motorcycle Mojo was there to take part in the press launch. With a totally redesigned engine, transmission and frame, this new middleweight adventure bike is poised to take the adventure market by storm.

Also on deck is the new Yamaha Tracer 900 GT. The Tracer 900 has captured the hearts of many riders, and to increase its market share, Yamaha has added some bells and whistles and touring amenities to make this bike even more practical.

Last fall, the road to Tuktoyaktuk, NWT, at last opened, and has since become a summer destination ride for adventure bikers to finally reach the Arctic Ocean. Rene Cormier checked out the route along with Piet Human and John Wellburn. They determined that while the route can be a beautiful ride, it was also very evident that Mother Nature is ultimately in control.

A custom Harley-Davidson Panhead, the second annual KTM Adventure Rally Canada and a travel feature of the St. Lawrence River round out this issue’s feature articles, plus so much more.