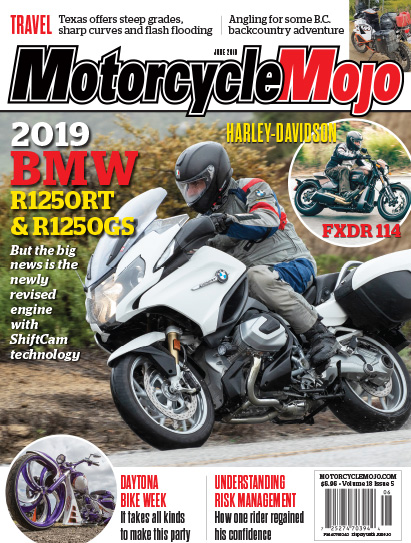 We’ve recently had the opportunity to ride BMW’s new R1250GS and R1250RT. Our article delves into the changes that the bikes have received, but the big news is that BMW has recently released its revised boxer engine with ShiftCam technology. This new technology enables the intake camshaft to move sideways, allowing a different set of lobes to open and close the valves, resulting in increased horsepower and torque, as well as reduced emissions.

We also took a ride on the FXDR 114, Harley-Davidson’s new power cruiser. While it isn’t the most comfortable motorcycle on the road, it is a real eye-catcher and is sure to turn heads as you ride down Main Street.

Our travel features include some of the best riding roads in Texas, as well as an adventure ride in British Columbia’s backcountry where single track, decommissioned fire service roads and hundreds of kilometres of gravel roads are the norm, and catching fish for dinner makes up for the lack of restaurants in the middle of nowhere.

They say a photo is worth a thousand words, so to save you some reading time, we bring you a photo essay from Main Street to the racetrack at Daytona Beach Bike Week.

All this and so much more in the June issue of Motorcycle Mojo Magazine.