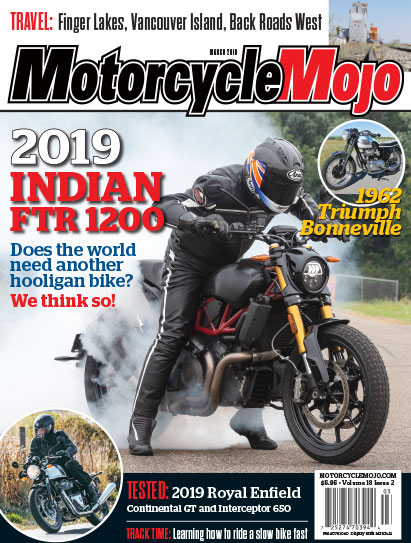 One of the most anticipated motorcycles has finally broken cover and in these pages you can read all about Indian Motorcycle’s FTR 1200. Fashioned after the race-winning FTR 750, this long awaited dirt-track-styled street bike is sure to be a best seller.

We also feature the new Royal Enfield Continental GT 650 and the Interceptor 650. After making the move to a parallel-twin with more displacement, Royal Enfield is hoping to create more markets around the world. The new bikes aren’t high tech but rather use tried and proven cycle and engine components that should prove reliable and long lasting.

Our March issue also features a beautiful 1962 Triumph resto-mod that started out as an image in the builder’s mind. Then a rare frame was found and slowly, piece-by-piece, the bike took form.

Our travel features include a 4,400 km trek from Eastern Ontario to the interior of British Columbia; the only prerequisite for the ride was to head west and stay off the Trans Canada whenever possible. Also included is a ride up the east coast of Vancouver Island, and a weekend trip to the Finger Lakes region of New York state.

This is just a sampling of what you’ll find in the March issue of Motorcycle Mojo.