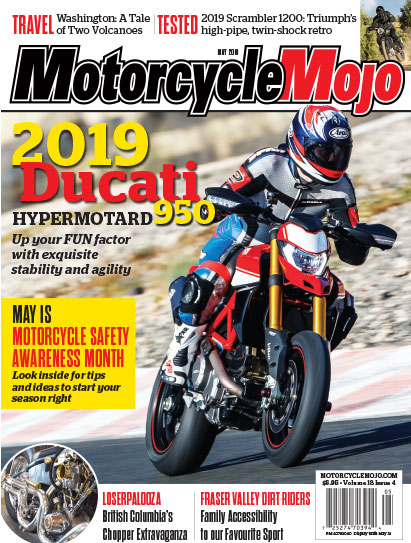 Ever since someone decided to mount a couple of 17-inch wheels and slick tires to a dirt bike, we’ve had this genre called supermotard. A few manufacturers have tried to cash in on the trend, but Ducati has stuck with it for some time now with its Hypermotard. Dean Edamura travelled all the way to the Canary Islands to test ride the newest Hypermotard to come out of Bologna, Italy. Could this be the best canyon carver on the planet?

While you might take one look at the new Triumph Scrambler 1200 and think it’s just another pseudo adventure-style street bike, you’d be wrong. Alan Cathcart sets the record straight after putting the big dual-sport to the test on the road and in the dirt. This bike might be the next big thing in adventure touring.

The west side of the continent has some of the best riding there is in North America, and that’s mainly thanks to the mountains. Keith Jared Baric spent some time in the Pacific Northwest taking in everything the area had to offer. That means great riding and fantastic scenery, including checking out a couple of volcanoes.

Misti Hurst tells us how she met up with a few members of the Fraser Valley Dirt Riders Association and discovered dirtbike camping. It seems the FVDRA has been clearing trails and a campsite for many years. Its mandate is to provide a safe setting for families to camp and ride on a trail system that’s suitable for all ages and experience levels.

The garage-built custom-motorcycle shows have been quite popular over the past few years in North America, and now Vancouver has one to call its own. We bring you a story about Loserpalooza, a custom-chopper event held every two years that draws people from far and wide.
This is just a sample of what you can find in the May issue of Motorcycle Mojo.