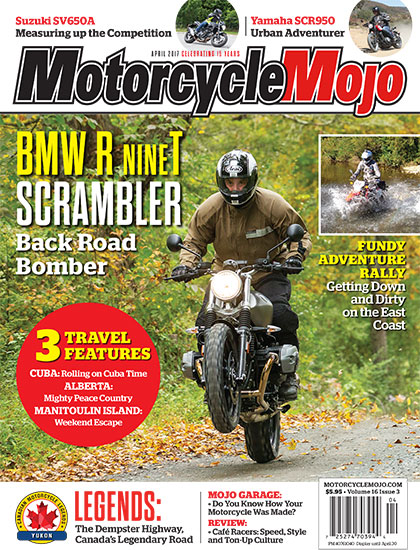 The April 2017 issue of Motorcycle Mojo is now available, and it’s full of great stories from some of our usual suspects and a few new contributors.
Costa Mouzouris puts on the most kilometres this month bringing us his impressions of both the new BMW R nineT Scrambler and the Yamaha SCR950. Both are stylized takes on popular existing models and they’re now ready to tackle the back roads after the scrambler treatment.
We’ve also spend a few weeks with the new 2017 Suzuki SV650A, a long-time class leader who’s hoping to return to its former glory.
In travel we’re joining Liz Jansen on her return to her families roots in Alberta, and then it’s off to Manitoulin Island for a weekend away from the flock and family for Will Ingram.
On a slightly more tropical note, Mojo follows along with an intrepid traveller, bound and determined to ride in Cuba on his own trusted mount.
In the world of adventure, editors Glenn Roberts and Costa Mouzouris team up with some serious characters and head into the woods for a little fun and tomfoolery on New Brunswick’s fantastic trails for the Fundy Adventure Rally.
And in this month’s Legends series, Greg Williams and Oliver Solaro discuss the Yukon’s mighty Dempster Highway.
All this plus our regular contributors and much more, can be found in the April 2017 issue of Motorcycle Mojo.