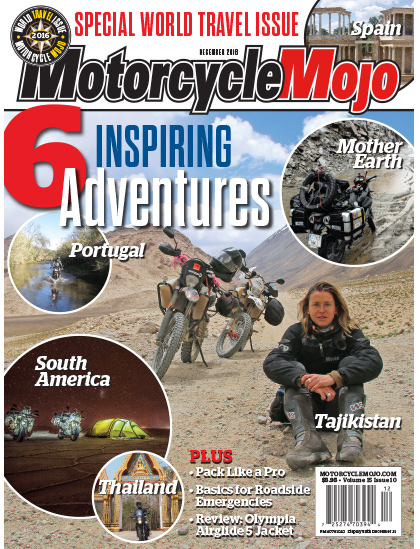 The end of 2016 is fast approaching, and that means its time for the Motorcycle Mojo December Special World Travel Issue to start arriving in mailboxes and inboxes far and wide.

As has become tradition, our last issue of the year contains accounts and images from travelers and adventurers around the world, and for this year’s edition, we’ve compiled a collection you won’t want to miss:

Join Antonia Bolingbroke-Kent and a small group of riders as they spend two weeks in Tajikistan’s high country amid stunning scenery and unexpected hospitality.

Manu Torres from Spain and Ivana Colakovska of Macedonia departed from Europe with only three points designated on the map – and they’re still on the road more than three years on, and 45 countries and over 125,000 km later.

Our roving editor Costa Mouzouris shares his secrets on just how one manages to jet around the world with everything needed for two-wheeled touring.

World travellers Bea Höbenreich and Helmut Koch bring us a stunning pictorial of their adventures in South America. A picture truly is worth a thousand words.

Glenn and Gwen Roberts glide through the vast Spanish countryside, soaking in the culture and history.

You’ll find all of this, and much more, in the December 2016 Special World Travel Issue of Motorcycle Mojo.