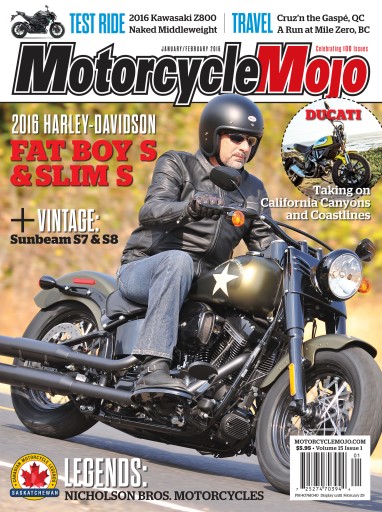 In our 100th issue, we bring you a diverse range of articles. First up is the 2016 Harley-Davidson Fat Boy S and the Slim S, which both come out of the box with the Screamin’ Eagle Twin Cam 110B, the Motor Company’s largest production engine. We also bring you the Kawasaki Z800. While it, and its 750 predecessor, has been in Europe for a number of years, this bike is brand new to the shores of North America. Can it compete against the other mid-sized nakeds? This issue starts a new series entitled Legends. Over the next 12 issues or so we will run an in-depth article about a person or event from each province that is historically important to the Canadian motorcycle scene. We also have two travels features; one takes place on Vancouver Island and the other starts in Nova Scotia and takes us around the Gaspe Peninsula in Quebec. Costa Mouzouris heads to California to sample a wide range of Ducatis. Even he was surprised by his favourite Duc. All this and much more in the 2016 January/February issue of Motorcycle Mojo.