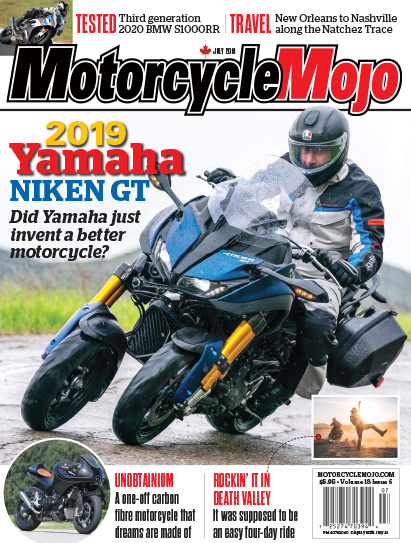 Our cover shot of the Yamaha Niken GT signifies one of the most significant motorcycle releases this year. The radical design has brought up many questions– the most common of which is “Why?” Yamaha is no stranger when it comes to funky front-end designs; remember the company’s short-lived GTS1000 from the early 1990s? This time around, though, Yamaha may be onto something. If you’re still wondering why, you’ll want to read Costa Mouzouris’ experience and test of this bike from the North American press launch.

Also in this issue is a track test of the 2020 BMW S1000RR that took place at Circuito do Estoril in Portugal. This third-generation RR has had almost every component revised from front to back, including the addition of the company’s ShiftCam technology into the 207 hp, 999 cc, four-cylinder engine.
Travel features in this issue include multiple award-winning rocker Clayton Bellamy’s ride through the Mojave Desert in what was suppose to be an easy four-day ride, but as usual, things don’t always go as planned. We also bring you a story that begins as an unplanned detour into New Orleans and then continues up the historic Natchez Trace to Nashville while learning about some of the Deep South’s checkered past.

Alan Cathcart brings us a story about a pair of brothers from the Netherlands that designed and built a carbon fibre monocoque-framed motorcycle powered by an Aprilia RSV4 engine. You’ll want to read about this amazing piece of ingenuity.

All this and so much more in the July issue of Motorcycle Mojo magazine.