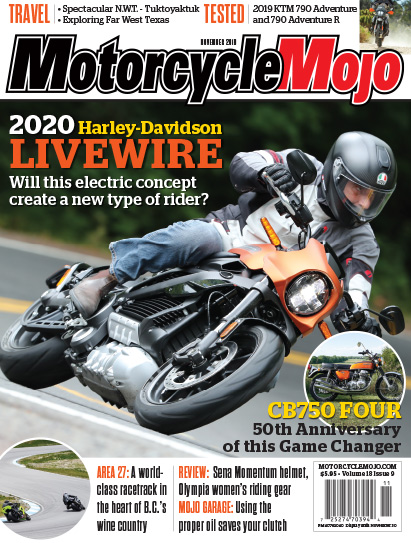 There is no question that electric vehicles are a going concern these days. Harley-Davidson recently hosted its international press launch for the LiveWire and we were there to sample the latest high-tech offering from the Motor Co. Electric motorcycles are still relegated to commuting duties; they just don’t have the battery capacity for serious travel.

On the flip side, because the LiveWire is electric, it offers its full 105 hp and 86 ft-lb of torque as soon as the throttle is twisted. And that sounds like a ton of fun.

We also feature the new KTM 790 Adventure and 790 Adventure R models in this issue. KTM is a leader in the off-road world and has taken the middleweight dual-sport to a whole new level with these 790 Adventures. In fact, staff writer Costa Mouzouris states, “I didn’t take long after hitting the dirt to realize that the Adventure R is just about the best adventure bike I’ve ridden to date.” That is a bold statement, but it says a lot about KTM’s newest midsize trailie.

Out travel features include a ride up the Dempster Highway from Dawson City to Inuvik and then the Inuvik-Tuktoyaktuk Highway to Tuktoyaktuk, N.W.T. on the Arctic Ocean. This highway combo is currently the coolest adventure ride in Canada and has seen a lot of motorcycle traffic since the Tuk Highway opened in November 2017.

Also in our lineup of travel features is an article about riding in West Texas. With roads that repeatedly twist and turn and rapidly rise and fall, they are worth every ounce of energy to navigate despite the blast-furnace temperatures and bone-dry land.
For the history buff, we have an article celebrating the 50th anniversary of the Honda CB750 Four, a game-changing bike that single-handedly transformed the motorcycle industry.

These are just a few of the entertaining articles in the November issue of Motorcycle Mojo magazine.