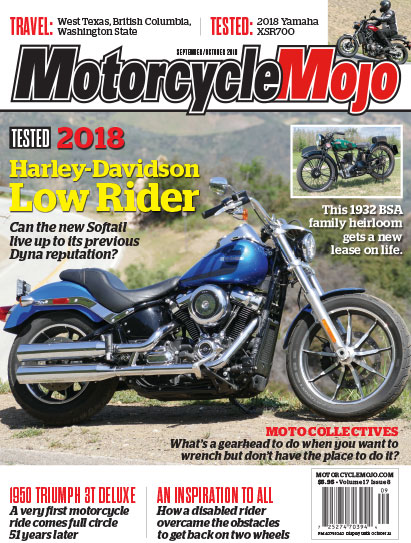 The motorcycle industry is no stranger to the introduction of the modern retro bike. Case in point, Costa Mouzouris brings us his report titled “Tribute to an Icon,” which features the 2018 Yamaha XSR700; the icon is the venerable XS650 of the ’70s and ’80s after which the XSR700 is fashioned.

In another throwback to an icon, Jamie Elvidge writes about her ride on the new Softail Low Rider. The Low Rider previously wore a Dyna name plate before being rolled into a brand-new line of Softail, but its initial introduction dates back to 1977. Is this a better bike than the Dyna version?

Misti Hurst has written a heart-warming story about Kris Bergthorson. He was riding in an Arenacross competition when he landed a jump wrong and crashed – breaking his back. Four years later he’s realized his dream and is riding again by designing custom-made landing gear, in addition to a few other needed items.

Wayne Rudd has recently had his 1932 BSA L32-2 motorcycle restored. He originally purchased it from an uncle in 1966, and it basically sat in a shed on the family farm for years. The most remarkable thing about this bike is that his uncle had bought it new in 1932 – this 86-year-old heirloom has never left the family!

Another vintage story comes from Canada’s East Coast. Calvin Danells’ first ride on a motorcycle occurred when he was just 13 years old, but he never forgot that first ride, or the bike. After having a family and a career in the Navy, he was able to track down the owner of that exact bike and buy it from him. Now that Danells has restored the bike to its former glory, he can relive his very first ride on that Triumph 3T Deluxe any time he wants.
All of this and so much more in the 2018 September/October edition of Motorcycle Mojo Magazine.