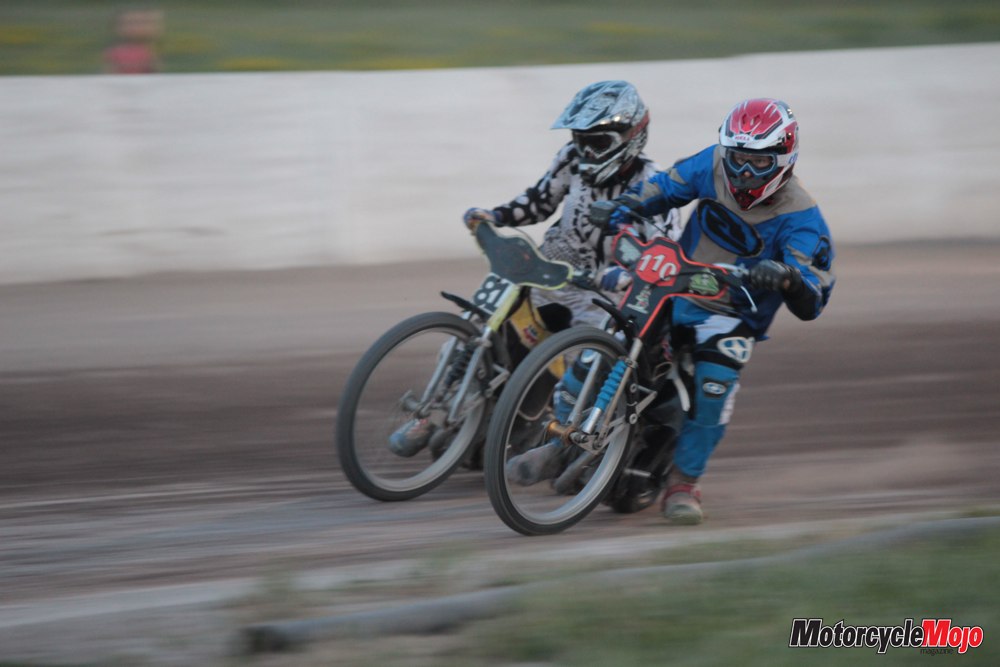 Dust, exhaust fumes and the din of open-piped, flat-track motorcycles charged the cool, crisp evening air. You could cut the atmosphere that hung over the Paris Fairgrounds dirt oval with a knife. Flat-track racing, also known as dirt track, is among the first and most primal forms of motorcycle competition. Oval-course racing has been around since the early 1900s, way back when it was also held on wooden board tracks. It is a guttural, mind-bending experience equivalent to being a modern gladiator in a full-contact jousting match. It’s certainly no place for an ex-racer such as myself. But there I was on the track, astride a hopped-up, 450 cc race bike, surrounded by a pack of other riders. It was my first time on a flat tracker or a “framer,” as the bikes are called if they have a custom-made chassis designed specifically for flat track.

Over the years, I have ridden and raced nearly every type of motorcycle except a flat tracker, and my first few laps were a humbling experience. My first impression was that this bike was twitchy and way over-powered – basically a wildebeest of a motorcycle. I came off the track trying to catch my breath, wondering how I was going to get this seemingly simple motorcycle to turn left. 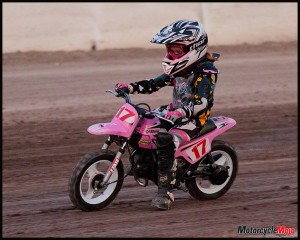 Flat-track racing has an irresistible allure. When you see it done right, it makes you want to try it, and when properly done, it is a thing of beauty to witness. No form of motorsports is more pure or full of passionate people, and yes, it’s also affordable. The equation is so distilled, yet so incredibly complex. The trackside pundits and amateur philosophers boil it down to its most basic element. “You go straight, then turn left, then go straight and repeat,” they say. The subtleties of the hallowed dirt surface are the key; the infinitely varying degrees of traction – and how near the edge of disaster one must approach to stay ahead of rivals – are the secrets. In a race, there is no letting up, or you will be swallowed up by the hoards of competitors snapping at your heels.

I sought some advice on how to master the Paris Speedway’s 1/8-mile oval from a couple of more experienced riders. Alex Olsen, 23, has been racing since he was 14. Olsen summed up Paris in a few words. “You need to get on the gas out of the corner as early as you can, give it a quick, huge shot of throttle, then hope you don’t overshoot the next turn and hit the aging plywood boards that line the track.” 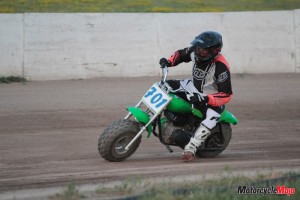 I heeded Olsen’s advice in the second session and started to cut some quicker, smoother laps. By the third time out, I was cooked, worn out and frazzled all at once. Then two younger guys went by, and of course, I tried to stay with them and scared myself enough to decide to call it a night so that I could live to ride another evening.

The flat-track spectacle at the Paris Fairgrounds is crammed into a three-hour, Friday-night, bullring-sized circus that just doesn’t let up. Heat after heat, bikes leave the start line in a fury, engines hitting rev limiters – BRAAAP, BRAAAP, BRAAAP! – as they spin into the tens of thousands of revs. The motorcycles protest as their adrenaline-fuelled jockeys wind throttles against the stops. Once the flag is dropped and the clutches are dumped, all hell breaks loose going into the first turn. Ten speeding motorcycles head for the same tiny piece of real estate called the apex. And when they round the corner, riders pick up speed down the minuscule straight before tossing their bikes sideways into a left-hand power slide in order to coax the straining two-wheelers around turns three and four, only to head down the equally short front straight. Elbow to elbow and wheel to wheel, the battle at Paris is flat-track racing at its finest.

Riders jostle for position using exaggerated body movements to fight for control over the bikes. The dirt-track surface at Paris is loose clay and as slippery as a greased pig. Occasionally, things go wrong and a rider goes down; often, too much throttle is the culprit, though it is rarely a serious cause for concern. Most of the time, riders just dust off and head back for a restart.

According to flat-track newcomer Mike Mason, the friendly atmosphere is what makes Paris fun. “You can ask anyone to help you out, even during the races,” he said.

The first step is to learn flat-track lingo specific to the sport. You will learn that a DTX bike is a modified motocrosser; you’ll learn what backing it in, hooking up and getting ass-packed means, and hopefully not what laying it down or high siding are all about.

The Paris Speedway (parisspeedway.ca) has been in operation since 1991. Founded by Dave Havill along with Jim and Joe Hesmer, the speedway initially offered a place where people could ride their speedway bikes in relative anonymity and not feel out of place if they showed up with an aging Jawa in the back of an old pickup truck or garden trailer.

These days Joe’s son, Aaron Hesmer, is at the helm and has made changes to increase rider attendance. Last season, a Friday-evening meet attracted up to a hundred racers, including Doug Lawrence and Doug Beattie, who are among Canada’s fastest and best flat trackers.

Hesmer claims that his lack of affiliation with a sanctioning body is the secret to his success. “Being able to add or change classes according to what people want to ride is key,” he says. The informal setting and friendly atmosphere is most certainly appealing, but so are the affordable entry fees and class structures that permit kids and beginners to feel welcome. “I have run Paris for the past three seasons. A few years ago, the recession hit the track hard – sometimes fewer than ten riders showed up. Now we average seventy and have had as high as a hundred racers.”

For Hesmer, Paris is a family affair. His dad, Joe, still drives the water truck, and many of the riders are young kids on shaft-drive Yamaha PW50s. There’s a chain-drive class as well, and a beginner class.

Practice is run every Tuesday evening from May until September. A Paris Speedway licence costs $25 for the year, and the entry fee is $25 per race night. For less than the cost of a half a tank of gas for your car, you can call yourself a racer, cheat death at every turn, and have a heck of a lot of fun in the process.

Don’t think that Paris is the only track around. There are many dirt tracks across the country where you can experience flat-track racing for yourself. Just ask around and join in the fun and exhilaration that this most primal form of motorcycle racing has to offer.