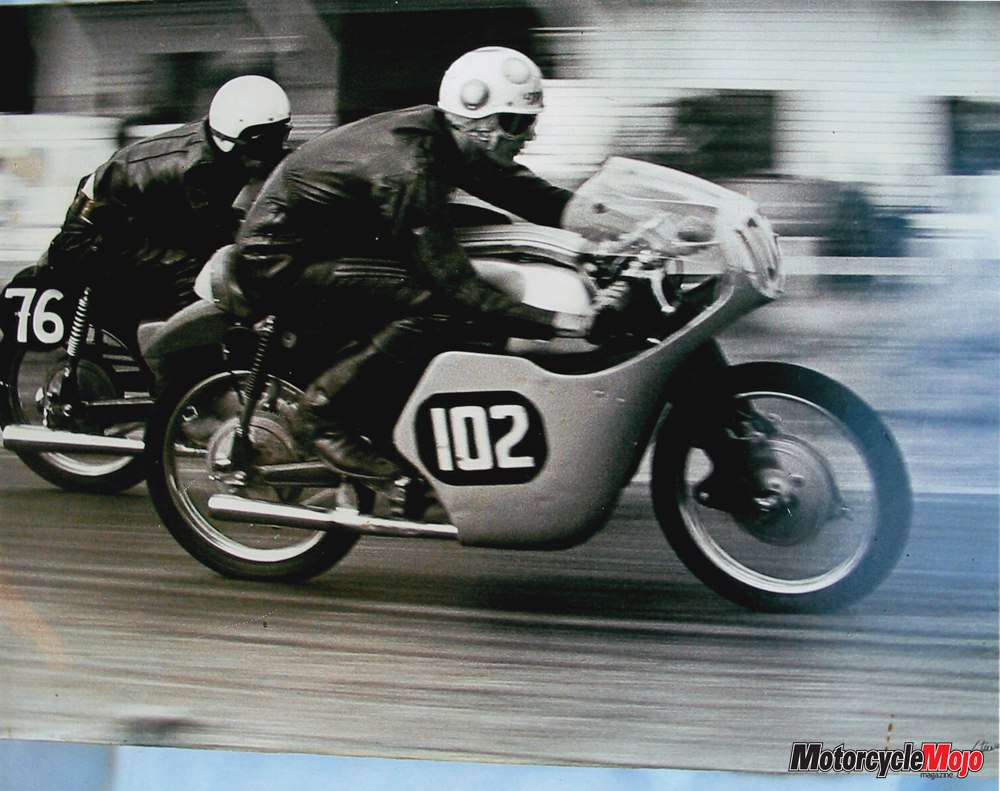 On December 2, 2012, motorcycling legend Mary McGee stepped into the international spotlight at the FIM (Fédération Internationale de Motocyclisme) Gala in Monaco, to present the Woman of the Year award to Spain’s Laia Sanz. Modest and never one to seek the limelight, McGee’s legacy is that of an indomitable woman.

Born on December 12, 1936, in Juneau, Alaska, her family moved to Phoenix in 1944, where she later met her husband, Don. An expert mechanic who had wrenched race cars on the east coast, he would introduce her to car racing and motorcycles shortly after their 1956 wedding. Five foot eleven, slender and shy, she described herself as “fast on my feet, fast with my brain, self-conscious and lacking confidence,” although as it would turn out, she “had no trouble with confidence on the race track.”
McGee was never one to shy away from adventure or to concern herself with the opinions of others. From an early age she followed her own compass, establishing herself as a trailblazer and inspiration, a role that continues to this day.

When a friend needed to sell a 200 cc Triumph Tiger Cub, it became her first motorcycle. She knew nothing about motorcycles but was willing to learn, and that Triumph sparked an enduring love for the sport. The only problem was, it didn’t always start. So it got traded for a Honda C110, which McGee used for shopping and commuting to her job as parts manager at Flint British Motors.

In 1957, she began racing cars with the Sports Car Club of America (SCCA). Through a series of fortunate introductions, she was offered a variety of cars to race, and consistently won her races. Instantly recognizable in her pink polka-dot helmet, she raced sports cars by Mercedes, Ferrari, Porsche, AC, Corvette, Elva, Jaguar and Lotus, winning races at tracks in Arizona, California and Texas. 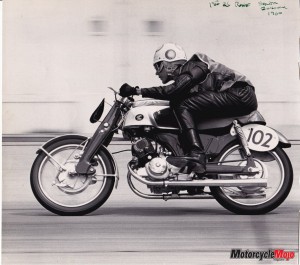 Ironically, it was car racing that began McGee’s foray into motorcycle road racing in 1960. It was while she was racing a Porsche Spyder in Santa Barbara, California, that the car’s owner, Czech race-car icon Vasek Polak, suggested to McGee’s husband that she should ride a motorcycle to further hone her car-racing skills. When he told her, she responded with her trademark, “Okay. Why not?”
A female road racer in the United States was a new phenomenon. McGee was already known for her car-racing prowess, but the American Federation of Motorcyclists (AFM) wanted to be sure she could also perform on two wheels, so she was told she’d first have to attend a tryout. She passed the audition and became the first woman to road race and hold an FIM licence in the United States – on a 125 Honda CB92, wearing her pink polka-dot helmet.

McGee was ecstatic in this new world. “I was always a little shy with the adults in car racing,” she recalled, “although I loved talking to the kids that mothers always brought over to our pits. But I loved the bikes. It was just the hottest thing ever.”

Not surprisingly, she caught the media’s attention doing what she does best: being herself and inspiring others. A January 1962 Motor Trend article started with “Housewives revolt!” and ended with “So ladies, if your life is dull and you are bored with freeway traffic, don’t give up. Buy a motorcycle and join Mary McGee.” 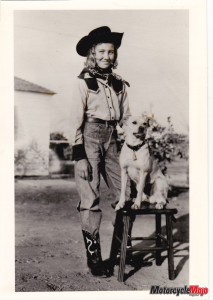 A New Year’s Eve party in 1963 attended by Hollywood stars who raced both cars and motorcycles, introduced her to a new form of racing. McGee recalls actor Steve McQueen telling her, “McGee, you’ve got to get off that pansy road-racing bike and come out to the desert.”
“And get dirty?” she responded. Her husband told her it was a great idea, and she was off.

With car racer and stunt guy Bobby Harris as a mentor, it wasn’t long before McGee was tearing it up in the desert on a Honda CL72. Her rite of passage came several months later, when Harris and other celebrity riders convinced her to enter an enduro at Jawbone Canyon, in the Mojave Desert. She was promised that it would be easy; it was anything but. A steep climb to a precipice overlooking a valley far below; a sharp left to avoid going over it, and steep descent got them back for lunch. McGee was so tired she wanted to quit, but her husband convinced her to continue. The afternoon was even more gruelling after some snow fell, but, completely exhausted, she finished and knew she had found another niche.

McGee was finally getting enough riding in. Road racing was partly physical, but mostly mental. Dirt riding was both physical and mental, and it tired her out. Regardless, she found a new love and lost interest in road racing.

Life can sometimes throw tragic curve balls, and in September 1964, her brother Jim was killed in a car crash while racing. Just after this, her husband, who’d been working for Honda, decided to take her with him on a cross-country dealer visit, to help take her mind off things. They set out in their El Camino with her CL72 in the back so she could attend races along the way. However, a few weeks into the trip, he had to fly back to California for work, leaving her to continue on her own. Enjoying gentle turns on the Henry Hudson Parkway, she was hit head-on by an out-of-control car and sustained multiple, serious injuries. While being treated for her injuries in the hospital, she also found out she was pregnant. She gave birth to a healthy son the following May, and spent the next 18 months recovering.

In late 1966, Wes Cooley Sr., who had gotten McGee her start in AFM road racing, told her to get her “desert sleds” running after he’d become enamoured with motocross while on a business trip to Europe. Although popular in Europe, motocross had not yet made its way to the United States, and in February 1967, she was the first woman to race motocross in the States. Even though it was a complete mud bath, aboard a Triumph 500 she was in her element. The handwriting was on the wall when her husband encouraged her to try his Greeves – one of the new two-strokes. McGee loved it and bought a 250 cc CZ. Short, low to the ground and nimble, it was an ideal bike for her to race. She was there for the first motocross races at Carlsbad and Saddleback, and also raced at numerous west-coast tracks.

The first Inter-Am race was held in 1967, offering prize money and attracting many of the great European motocross racers of the time, as well as an American woman. McGee transported her CZ on the front of her VW bus with her three-year-old son, 11-year-old nephew and husband in tow, to circuits from Denver to San Francisco.

As if all of this wasn’t enough, she got a call in 1967 asking her to drive the inaugural Baja 1000 in a Datsun 510. In typical fashion, she agreed, soon discovering it was more arduous than anything she’d ever encountered. “I think back now to how truly primitive Baja was in those early days and say, ‘What was I thinking?’” Nonetheless, she kept at it for two years, then ratcheted up the challenge, accepting an invitation from Joe Parkhurst, publisher of Cycle World, to co-ride the inaugural Baja 500 on a Husqvarna. When Parkhurst broke his leg mere days before the pre-run, top desert rider Bobby Ferro became her co-rider. Unfortunately, the Husky seized and they didn’t finish.

In 1970, the McGees moved to Idaho and opened a small Husqvarna dealership. Two years later, she became the Husky District Manager for seven western states, all the while racing motocross in Idaho, Washington and Nevada, and escalating her involvement in the Baja.

McGee returned for the 1973 Baja 500 and the 1974 Mexican 1000, both of which she completed. In 1975, not only did she complete solo in the Baja 500, she also entered the Mexican 1000 in a Toyota pickup with co-driver Janet Guthrie, who would eventually become the first woman to race at Indy. Mechanical problems put them out two-thirds of the way through the race, stranding them in the middle of the desert.

In 1976, her life’s trajectory was changed again. McGee turned 40, newly divorced, and she found herself out of work due to restructuring at Husqvarna. With no jobs in Ketchum, Idaho, and with a young son to raise, she moved back to California, where she became the western sales manager for Motorcyclist magazine. Except for a 24-hour road race in 1977 followed by a shorter, six-hour road race a few months later, she stopped racing for almost 30 years, focusing instead on raising her son and advancing her career.

But racing did not leave her blood. A chance meeting in 2002 with old friends in northern Nevada, where she now lived, introduced her to vintage motocross racing. Encouraged by her friends, she purchased a 1974 Husqvarna 250 and started racing in the women’s over-60 class. She was in her glory, bolstered to know she could still get out there, compete, have fun, and most importantly, reconnect with old friends and acquaintances. For a while after turning 70, McGee raced both the over-60 and over-70 classes, but has since dropped the former.

Her story might have remained untold had it not been for a chance occurrence. When a long-time friend heard that the AMA was holding its 2012 International Women and Motorcycling Conference (IWMC) in Carson City, he emailed Tigra Tsujikawa, then the AMA’s Marketing Manager, alerting her to McGee’s history. Tsujikawa immediately arranged to meet McGee during a site visit in April.

Conference executive council members Sarah Schilke, Maggie McNally and I were honoured to meet this legend in her home. We were in complete awe as Mary, tall, statuesque and full of energy, narrated a tour through her home filled with racing memorabilia, pictures and stories. She was an instant attraction at the conference, where she caught the attention of the FIM’s Commission for Women in Motorcycling (CFM) representatives.

As she led the parade of motorcyclists through the streets of Carson City, it was an honour to ride with her. Ironically, she had never obtained her road licence, yet here she was, leading hundreds of riders to the State Capitol Building. Rest assured, all had been cleared with officials and no laws were broken. Honoured at the closing ceremonies, McGee kept the audience rapt with her stories.

She never considered herself different because she was a woman. “I just raced,” she recalls. “I never thought about it, and nobody brought it up.” She did get asked a few times what it felt like to be a woman racer, and her response was always the same: “It feels like I’m racing.”

Her encouragement to women riders today is simple. “You’re a rider,” she tells them, reminding them to think, “I’m a woman, I can do it.” She also tells women not to get discouraged by others. “If you don’t try something you want to do, whatever that is, you don’t have any stories to tell.”

McGee reflects on the life lessons she’s learned through riding. “Patience,” she says. “Sometimes things go terribly wrong . . . it’s tough and you just have to take the lumps. But I’ve got wonderful stories from all that stuff. What else would I have done? Go shopping?”

And she’s got plenty of stories from living her life to the fullest. She loves to tell them, and she loves to hear stories of racing and motorcycling in general.
After the conference, McGee chalked up another achievement by completing the basic rider course and finally obtaining her road licence. I can only imagine the initial expectations of the instructors and other students after they found out they’d have a 75-year-old woman in their midst. Little did they know it was Mary McGee!

McGee, with her adventuresome spirit, can-do attitude and competitive edge, is now inspiring people around the world. I’m sure there are many more stories to come. Thank you, Mary.