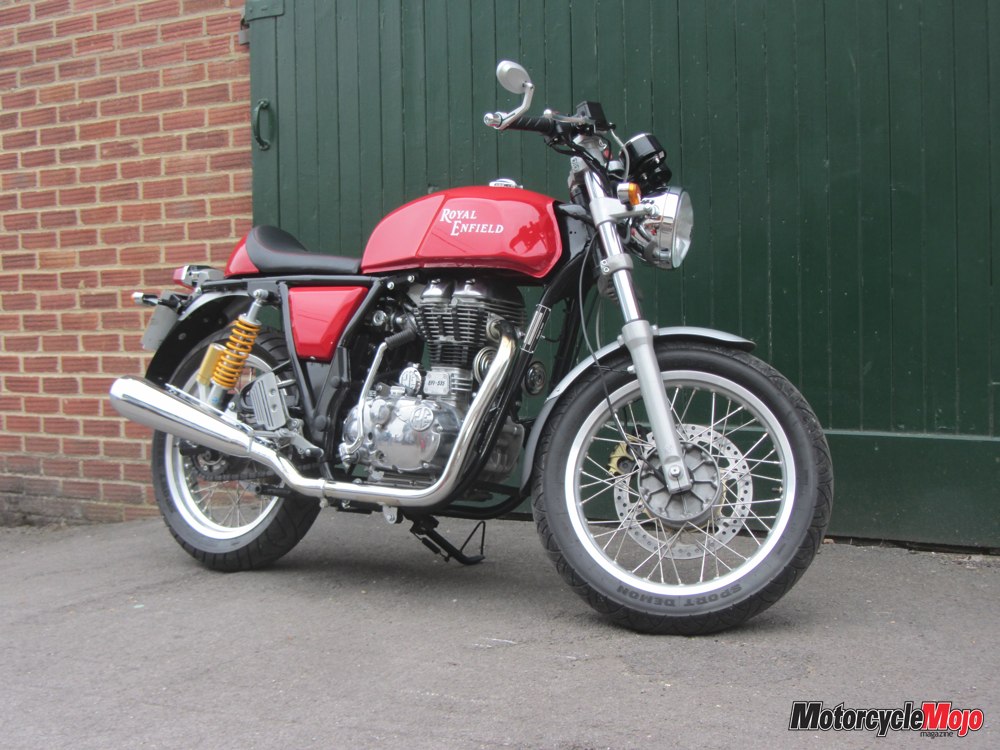 Original café racers were built on a limited budget, making ownership affordable to the working class. The 2014 Continental GT is also priced to sell

Johnny pushes his bike flat out coming up North Circular Road. A handful of grip pins the throttle wide open, and the engine screams as he navigates around the last car in his path. A last-second manoeuvre to cut in front of an oncoming car lands him in the parking lot of the Ace Café. He brakes hard as he pulls up to the main door – time is of the essence. He runs into the Ace just in time to hear the end of Eddie Cochran’s “Live Fast, Love Hard, Die Young” blaring out of the jukebox at the back of the Ace. His friends pat him on the back just as another five pence drops into the juke box and another rock ‘n’ roll song begins, and the ritual of record-racing starts again as another rider risks life and limb.

It was a new age of motorcycle culture that created the café racer, and equally important, the Rocker. Legend has it that if a rider could leave the Ace at the beginning of a song, ride around a prescribed network of roads and be back before the song ended, he will have reached the “ton” – or 100 mph – at some point during the run.

They say history repeats itself, and over the last few years, the café-racer craze of late-fifties England is now back in its prime – in North America. The café racer could be described as a stripped-down, minimalist bike fashioned after race bikes of that era – nothing fancy or extravagant – just a bare-bones machine consisting of an engine, wheels and a frame, and the necessary ancillary components to get it on the road. 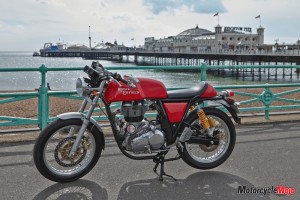 Based on the original only in style, name and colour, the new GT is a fully modern motorcycle that exudes the character and authenticity of the Rocker era. Built in a brand-new facility in Madras, India, the new GT is the fastest and most powerful Royal Enfield in production today. An air-cooled, fuel-injected, 535 cc single-cylinder engine with five-speed transmission powers the sleek café. The new GT isn’t a powerhouse, but the company is fully aware of this; they aren’t trying to be the biggest and the fastest. What they are doing is producing a bike that’s economical to own with a soul and style from one of motorcycling’s classic periods.

The engine seemed cold-blooded in the chilly, damp morning in front of the Ace Café, where around 40 bright red Continental GTs were lined up in two rows. It was after all, London, England. What better place to launch the GT to the world than in the heart of Rocker nation – at the Ace Café, one of the original rocker hangouts. Even though the new GT is fuel injected, the enrichener lever had to be engaged for a few minutes until it was warmed up, or the bike would idle down and stall. Interestingly, to give it an air of authenticity, the GT even has a working kick-starter – something that hasn’t been seen on a new production streetbike for decades.

The organizers assumed it would be possible for all 40 bikes to stay together in London traffic. However, problems arose just getting out of the parking lot exit at the same time, resulting in a lot of clutching and waiting – reminiscent of the holeshot at the start of a motocross race – except in very, very slow motion. Thankfully, the cable-operated clutch action is light, and once we got moving on the motorway, the transmission worked flawlessly with smooth, quiet shifts. 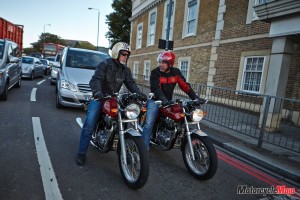 At 184 kg and with a seat height of 800 mm, the GT is nimble in the city and would make an ideal bike for urban dwellers or commuters. With the engine’s limited power output and low gearing, rowing up and down through the gears made for a fun city ride, and I spent my fair share of time filtering through traffic, trying to keep up with the pack of bright red GTs, but to no avail. London is a big city, and the result was small pockets of journalists spread out all across the metropolis in a futile effort to stay together. Once outside of the city, we were fortunate to be able to spend some time on the motorway with Brighton in our sights. The GT felt stable on the highway, even when we were keeping up with one of our guides, who either forgot about us or imagined he was trying to do the ton (he didn’t, by the way). Unfortunately, the London traffic ate away so much time that we weren’t able to sample any of the scheduled twisty roads en route, so I cannot say anything of the GT’s cornering prowess.

The GT accelerated quickly considering that the engine only produces 29 horsepower, but passing another vehicle at speed does take planning and adequate space. At highway speeds, the single-cylinder engine began to feel quite busy at around 4000 rpm, the same time the vibration started, and coincidentally, the same place the engine produces maximum torque. The vibes weren’t really that annoying except when they started to filter to the clip-ons through the Harris Performance–designed double-cradle frame. I didn’t feel much vibration through the foot pegs or the seat.

Hearing every power stroke, I was impressed with the tasteful exhaust note of the single, only to find out, after some prodding of Royal Enfield staff, that all of the bikes had an optional muffler installed.

The GT was more comfortable than I initially expected. On our ride from London to Brighton, I was able to log about 140 km on the bike, and although there were stops during that time, I didn’t find it irritating on any body parts. The clip-on handlebars are bolted above the triple clamps and allow for an almost upright riding position. The seat is thin but offered adequate support for an hour or so at a time. I’m not sure if I would feel the same after a marathon ride on the solo seat, but there is wiggle room fore and aft. In traditional café-racer style, the fuel tank has indents for the knees, but I found the tank too high to use them as designed. When I tried to grip the tank with my knees, my kneecaps fell just below the tank’s bottom edge.

The bar-end mirrors look the part, but they were small, and once the vibration began, they became useless. Instrumentation includes two dials – an analog speedometer with LCD mileage display and an analog tach with standard indicator lights. The switchgear includes the basics – turn signals, horn, high- and low-beam, passing-light switch, starter button and kill switch.

Suspension was soft all around. Hitting a bump while the steering was turned, it felt as though the front was going to tuck, and the pair of Paioli rear shocks with piggyback reservoir bottomed out on abrupt bumps. The single two-piston Brembo caliper and 300 mm disc up front provided good stopping power, but without a heavy foot on the rear brake pedal, the single-piston caliper out back didn’t help much in the stopping department. Laced 18-inch wheels front and back shod with Pirelli Sport Demon rubber completed the connection to the ground.

I have to admit that the Continental GT is true to its heritage, and it’s a great-looking bike – it turned heads everywhere we went. A crowd would always gather around the bikes if we stopped for any length of time.

If you are looking for a traditional-style café racer to do the ton, you might want to look elsewhere, as this machine is underpowered for such shenanigans. But for a new rider, or an experienced rider wanting to relive a moment of youth, the GT offers classic styling in an uncomplicated and affordable package. Ready for a weekend burn-up, anyone?