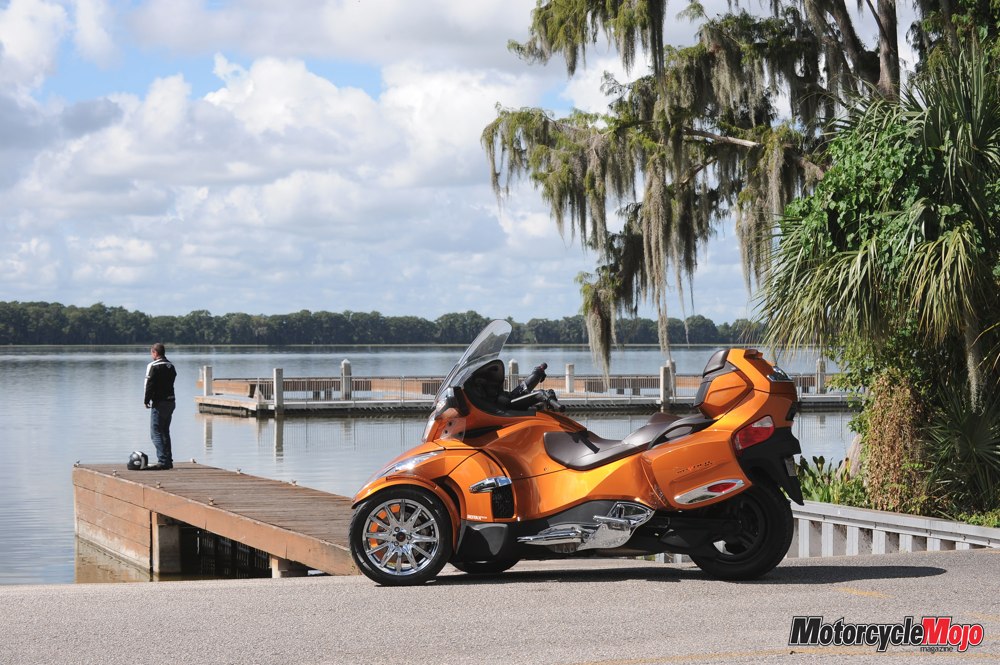 First and foremost, let’s get one thing straight: the Can-Am Spyder is not a motorcycle. It is only classified as such because there’s no provision in the governmental classification system for street-legal vehicles with three wheels – and it’s clearly not a car. That doesn’t mean it’s not a sensible, serious vehicle, and it has built a following since its introduction in 2007. It is this motorcycle classification, however, that has made it a vehicle you either love or hate. Most owners love them, and many Spyder owners’ groups have popped up since its inception. Most motorcyclists don’t like them, mostly because of that extra wheel, and I get that.

But the Spyder isn’t aimed at motorcyclists; it’s targeted at an entirely different, and previously nonexistent niche. There are countless possible Spyder buyers out there, some with disabilities that prevent them from holding up a motorcycle at a stop, some who are too old and others who are intimidated by two wheels. Also, thousands of ATV and snowmobile owners are attracted to a vehicle that offers similar sensations but is street legal. And there are some motorcyclists, too.

Probably the most practical Spyder model, and the most appealing to me, is the RT. It’s Can-Am’s touring model, with integrated saddlebags and top case, cruise control, a sound system – basically all the frills you’d find on luxo-tourers like the BMW K1600GTL and Honda Gold Wing, plus a forward storage compartment. BRP held a new model presentation for the Spyder line in Orlando, Florida, and among a few new colours and some minor changes to its existing models, the Canadian maker of powersports equipment also revealed the 2014 Spyder RT. 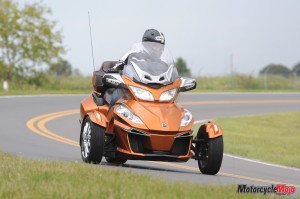 Until last year, the RT was powered by the same engine that propelled all Spyders, a 998 cc, 60-degree V-twin made by Rotax, a subsidiary of Bombardier, and originally designed for Aprilia motorcycles. Its six-speed transmission was modified to incorporate a reverse gear for use in the Spyder, thereby losing one forward cog in the process.

Can Am breaks from tradition by offering the 2014 Spyder RT with an all-new engine, and this time it’s not based on a motorcycle design, but is specifically made for the Spyder. The RT now uses a purpose-built, 1330 cc, ACE (Advanced Combustion Efficiency), liquid-cooled, inline three-cylinder engine with a six-speed gearbox (plus reverse), which is still available in manual and semi-automatic variations. The new engine claims a 40 percent improvement in low-end torque, especially below 4000 rpm, as well as an increase in peak horsepower, now at 115. Peak torque is also up to 96 ft-lb from the V-twin’s 80 ft-lb. This increase in torque should be most evident when the vehicle is loaded with a passenger and luggage, or when it’s pulling a trailer. The maintenance schedule has been revised with the new engine: oil-change intervals have gone from 7400 km to 15,000 km, transmission oil filter replacement from 7400 km to 45,000 km, and valve adjustment has been eliminated. 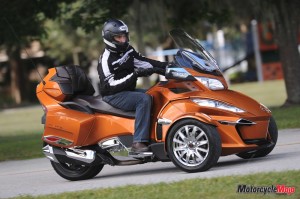 When I asked why more power wasn’t squeezed out of the larger engine, I was told that additional power would have been wasted on all of the electronic intervention designed to keep the Spyder’s three wheels firmly planted on the ground. Or maybe BRP is just leaving some room for future improvements, as I was told that this engine will eventually make its way into other Spyder models.

Three trim levels are available: the standard RT; the RT-S with added rear air suspension, rider floorboards, an anti-theft system and some cosmetic touches; and the one I rode, the top-of-the-line Limited, which adds chrome trim, a rolling travel bag in the front storage compartment and a Garmin Zumo 660 GPS unit. The base and S models come with either a standard manual transmission or optional semi-auto six-speed, and the semi-auto is the only gearbox available on the Limited. Prices start at $25,499 for the base RT and go up to $33,799 for the Limited.

Upon start-up, the first thing I noticed is that the new engine has completely changed the character of the RT. The burbling hum of the inline-triple is much more becoming in a luxury-touring three-wheeler than the lumpy rumble of a V-twin. The engine is smooth, sounds great and accelerates seamlessly.

I had a chance to sample both the new and old Spyder RT in Orlando, and despite the improvement in torque on paper, the V-twin still felt peppier off the line. This is due partly to the triple’s much taller gearing (top-gear cruising has dropped to 3300 rpm from 4700), but also because of the new machine’s added weight. It now weighs in at 459 kg, up from 412 kg.

The new RT really picks up the pace once the engine gets spinning, though, and will walk away from the outgoing model at higher speeds. The added weight really isn’t an issue when riding the RT, as you don’t have to hold it up when at a stop.

Aside from gaining one more forward gear, another major change in the transmission is incorporated into the clutch in the semi-automatic model. It no longer uses a centrifugal clutch like in the previous version, but rather a computer-controlled hydraulic clutch.

The new RT launches with fewer revs than the V-twin-powered semi-auto (it also idles 300 rpm lower, at 900 rpm), which makes parking-lot manoeuvres more fluid, and it shifts gears smoothly and efficiently.

Like the outgoing model, the new RT semi-automatic model shifts gears via a rocker switch located below the left handgrip. You can only shift the semi-auto Spyder using this switch, for there is no automatic mode. I think this is an unfortunate omission, because it would make the Spyder easier to ride and would probably broaden its appeal. It would also make the optional, fuel-saving eco mode truly useful by allowing the computer to shift gears to help achieve the best fuel economy. As it is now, the eco mode only has a small arrow that lights up in the TFT in-dash screen, suggesting when to shift for optimum fuel economy.

Speaking of fuel economy, BRP does not publish fuel consumption numbers (how are they getting away with this?); however, I was told that Spyder RT test riders squeezed 405 km out of a 26-litre fuel load, which averages out to 6.4 L/100 km. The last Spyder RT I rode averaged 8.9 L/100 km, so if the claims are near accurate, the new engine is a considerable improvement. Fuel economy might be a factor for potential buyers, because the RT requires costly premium fuel.
Other changes include improved shocks with bigger pistons, which are smoother in operation, especially when hitting sharp bumps. The overall ride quality is improved, especially straight-line stability. Spyders have a tendency to twitch when hitting bumps at highway speeds – not alarmingly, but noticeably – and they follow ruts along the road; these tendencies have been greatly reduced on the new RT, but steering effort, despite being assisted on all Spyders, is heavy.

The seating position is relaxed, and the Limited (as well as the S model) has large rider floorboards and adjustable passenger floorboards. The standard RT has the passenger floorboard, but the rider will have to make do with foot pegs. There’s also a new, wider seat, and it can easily match the king of comfort, the Gold Wing seat. It’s all-day comfortable, and although I didn’t ride with a passenger, the rear pillion is ultra-wide and offers the added support of a raised seat bolster, backrest pad and armrests.

Long-distance touring is certainly the RT’s main attraction, as it features 155 litres of storage capacity. Other standard-issue touring amenities include the cruise control, heated grips, electric windshield and a sound system. The RT also uses a more powerful, 1200-watt alternator – 85 percent more powerful than the old alternator – which should easily handle electrically operated accessories like heated riding gear. If you’re really serious about your three-wheeled touring, you can get a colour-matched, purpose-built trailer, which starts at $4999.

One of the Spyder’s most redeeming features is its weather protection. During the press launch, we encountered a 30-minute Florida downpour on the highway, and I remained almost completely dry, even at my feet, which were protected by the protruding front wheels. I wouldn’t hesitate to take a weekend tour on an RT; I’ve already done so in the past and really enjoyed it. But, as a rider, I can only form a short-term relationship with a Spyder; I did end up missing a motorcycle’s most redeeming feature – its ability to lean – after a couple of days.

But, like I said, the Spyder isn’t meant to entice motorcycle riders; these three-wheelers have unlocked open-road touring to a new type of rider. The new engine might hide under the bodywork, unseen, but from the rider’s perch, it has completely transformed the Spyder RT into an even more appealing three-wheeler – if you like that sort of thing.