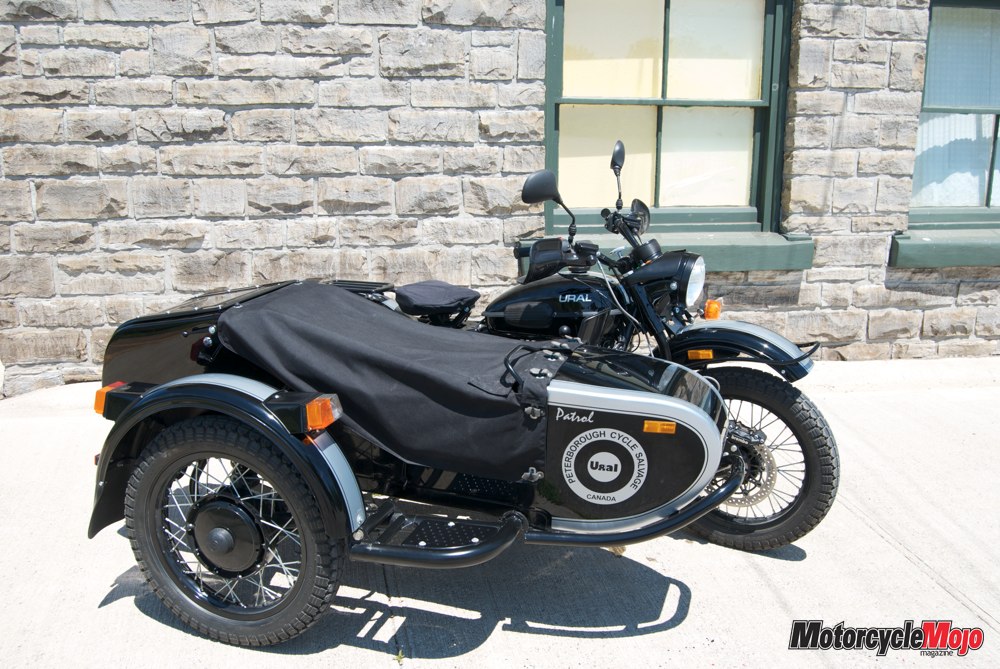 Even if the bike is fresh from the showroom floor, every Ural owner has to field the question, “How old is your bike?”

There’s a guy who lives up my road and rides a Ural Patrol, and he and his dog go past my place like clockwork. By chance, I pulled out of my drive just as he was putting past. I guessed he was just heading into town and wasn’t in much of a hurry, as he didn’t exceed 60 clicks all the way. I could have passed him, but I’d seen his rig parked at the local dirty dozen, and I thought I might have a chance to speak with him. Luck was with me, as that’s exactly where he was headed. He pulled into the coffee shop and backed into a spot that was just big enough for his rig. Once stopped, his dog curled up in the hack and dropped off into snooze-land. He flipped the trunk open on the hack and replaced a very battered half helmet with a straw hat – it matched his rubber boots. He had “eclectic” written all over him, and it turned into an interesting conversation.

I was introduced to the Ural Tourist and Ural Patrol sidecar rigs with some unusual instructions: “This is the parking-brake lever, twist it this way to engage, and here’s the reverse-gear setup.” Pretty unusual directions for someone in the motorcycle industry. However, I wasn’t learning how to operate a particular bike here, I was being introduced to the peculiarities of a timeless design and characteristic cult icon. 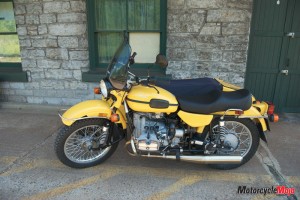 I believe that there’s always room for something different, and both the Ural Tourist and Patrol models are certainly that. The bikes are also enjoyed by folks who use a bike differently than most. Let’s face it, how many riders use their bikes in the dead of winter to get to their fish huts, or toss a bunch of repair tools in the hack just to make sure their farm fence is properly mended, or to check that a herd of bovines are where they’re supposed to be? Urals appear to be built for entirely different purposes than most bikes, and to see a Ural raising a cloud of dust on a gravel road is far more common than to see one going down the highway.

After the obligatory guide around the bike, I was off. This was my first time in many years to ride a hack, so I did a few laps of the Peterborough dealership before heading out. The Ural Tourist and Patrol are very similar, with the exception of the driven sidecar wheel on the Patrol model. Being in two-wheel drive comes with a learning curve, and I can tell you that engaging the hack’s drive wheel while riding on pavement turns the bike into an uni-directional plough, because both drive wheels are locked together. 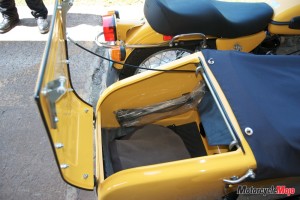 On a two-track vehicle, the outer wheel travels more distance than the inner wheel when rounding a corner, and usually a viscous coupler or a differential looks after this difference in travel. If cornering the Patrol model is in your plans, you’ll want to be riding on sand, gravel, snow or some other surface that allows generous wheel slip, or else the bike wants to motor straight ahead, regardless of handlebar input.

With a claimed maximum of 40 horsepower and 38 ft-lb of torque, the carbureted Ural 749 cc opposed-twin doesn’t offer copious power, and after riding both the Tourist and Patrol, I can say without reservation that some added horsepower would be welcomed. As a matter of note, the 2014 models have been upgraded to electronic fuel injection, which according to www.imz-ural.com, provides a slight increase in horsepower and torque.

Instrumentation is basic and consists of a speedometer with odometer, signal indicator, charging lamp, high-beam indicator and neutral light. The switchgear offers fairly large, basic buttons, and operating them with heavy gloves on isn’t a problem. The speedometer I found a little frustrating on both models. Being new, you wouldn’t think there would be any speedometer needle bounce, but bounce there was. However, with the lack of horsepower, you really need not worry about being over the posted limit, unless you are riding in a 50 km/h zone, but then, the needle didn’t bounce much at that speed.

Russian folks must be built differently than us Canucks. I figured that to fit the Ural properly and in comfort, a rider should be no more than 5 foot 6, with a size 4 right foot and a size 10 left. However, I was told that there’s lots of adjustment room, so I can only hope that it could be better fitted to my 6 foot frame and size 12 feet than the test models I rode. The small right-foot requirement comes from the room allotted for the foot peg and the positioning of a sidecar mounting bracket. I rode both models with my right foot resting on the mounting hardware for the hack, not on the peg. I also found that I was always stabbing the rear brake pedal with the toe of my boot.

On the left, I found a heel-toe shift lever, but I was not able to utilize the heel part – my boot just didn’t seem to bend the correct way. The shift lever felt too far forward under the left cylinder head, so it would have been nice to use the heel end of the shifter, but it was too far inboard to properly utilize.

Seating was not a terribly happy topic. The Patrol model is perhaps a little friendlier than the Tourist; however, neither seat is what I would call an all-day seat. Even short jaunts seemed to have me fidgeting to find a comfortable position, and I’m used to very long days in the saddle. I understand that some saddle adjustment is possible, and that may have alleviated some grief. Positioning to the bars seemed to be fairly good, but again, some small adjustments could work wonders. The bars felt short, and wider bars may have added some comfort to the equation.

Braking is handled through a Brembo caliper and single floating disc assembly up front, with a mechanical drum brake bringing up the rear and on the sidecar (the 2014 model has disc brakes all around). Braking seemed adequate, and fared quite well with the hack adding to the braking power. The whole rig seemed to stop straight and clean under hard brake applications.

Suspension is Sachs engineered, with a typical sidecar leading link–style front end married with what looks like two adjustable rear shock absorbers. The ride was quite pleasant, although one must remember that the side rig is going to have some serious input that the rider must compensate for. This first came to light when I crossed a small speed bump; the hack produced a good bounce halfway through the crossing, which reminded me in a jolting way that I was piloting a sidecar. That brings me to control of the rig, which, once past a very small learning curve, is quite predictable.

Left turns can be as tight as you want; however, right turns require a little more attention. I was able to lift the empty sidecar quite easily, and I have no doubt that the first few attempts looked rather clumsy. Practicing right corners brought more confidence, as the hack seemed to hang at the perfect angle. Adding a load in the sidecar would completely change the characteristics of a right turn, but as with any machine, practice makes perfect.

Probably the hardest thing to overcome with the hack was the simple fact that it was there. No longer are you a skinny bike that can wiggle through tight spaces. I found I had to be conscious of the bike’s girth around traffic and “un-learn” some typical two-wheeled habits.

If your purchasing criteria for owning a rig includes copious power, then the Ural is not for you. The Patrol and Tourist models have perhaps enough power to do what they were designed for, but that design does not make speed paramount. My time on both the Tourist and Patrol left me feeling dangerously underpowered for the speeds experienced on multi-lane highways. Maintaining 100 km/h is just seven km short of maximum rated cruising speed, and therefore, pacing traffic on any 100 km/h highway is asking a lot from the Ural boxer. However, I must go back to the perceived use of the bike, which is back road and off road.

Both the Tourist and Patrol models seemed to draw a crowd wherever I stopped, and the first question would be, “How old is the bike?” When I stated that it’s a 2013 model, I got some unusual looks in return.

The Ural’s toolkit is also something to note; it’s a huge tool wrap that looks like it could tackle any job. A full-size tire pump is inserted into the hack’s storage trunk; fortunately, I didn’t need to perform any repairs on the 19-inch laced wheels or tires.

Fit and finish was a little disappointing. Some very crude hardware was employed, and I also spotted far too much rust on display for any new machine. The Ural’s technology is not new by any means; some parts used are downright old fashioned, like the transmission-to-final-drive coupler. I couldn’t help but chuckle at the transmission crank, which fitted into a rubber cup on the driveshaft end. I may be right off track here, but that particular buffer system must have been outdated back in the ’40s. That said, simple and crude are sometimes very easy to fix, so is it a bad thing? I suppose the answer lies in the eye of the beholder.

They were fun to run for a day. Neither of the Urals were my particular cup of tea, but that’s what makes life so interesting. If we were all the same, things would be more than just a little boring. I do have some issues with the cost. According to www.uralcanada.com, the cost of the Tourist sits at $13,299 and the Patrol for $14,299; these are expensive rigs considering the technology, fit and finish that’s employed.

If you’re looking to patrol the back forty, or to slip on your rubber boots and simply putt into town with your dog, then the Ural could be a serious contender. But if you’re looking for a capable fast-passage, coast-to-coast machine, you might want to do your homework before laying down 13 or 14 large.