A competent retro throwback for those who want a performance-driven parallel-twin but not the futuristic Transformer-like look of its MT-07 brethren. 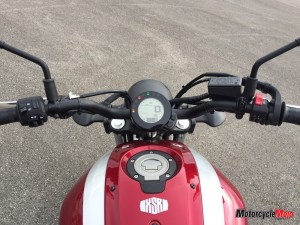 In 2015, Yamaha brought the FZ-07 into North America, and the bike was exclusive to Canada that year, having skipped the U.S. market entirely. What was remarkable was that despite being limited in availability to only north of the border, Yamaha Canada managed to bring it in at a remarkably competitive price, though part of the deal was that it lacked ABS. The bike has done well for Yamaha, and it has been refreshed this year and renamed the MT-07, aligning it with its European nomenclature.

The MT-07 features modern styling with angular lines and a Transformer-like headlight pod, and will likely prove as popular as the original. However, maybe you’re not keen on the MT-07’s aggressively angular silhouette. Maybe you prefer more subdued styling, but would also like to enjoy the MT-07’s light weight, nimble handling and remarkably powerful engine. Well, Yamaha’s solution was to bring the XSR700 to Canada this year, a bike that has been available in Europe since 2016. Based on the MT-07, the XSR700 features styling with a retro flair.

Although even long-time riders might not see the resemblance, Yamaha’s literature for the XSR700 claims it “pays tribute to the iconic Yamaha XS650.” Well, we can’t see it, either, but at least like its XS650 ancestor, the XSR700 is powered by a parallel-twin. The XSR700 has a bulbous gas tank, a traditional round headlight nacelle, a taller handlebar that’s pulled back slightly and plastic panels below the tank that hide some of its mechanical bits; it also has a new sub-frame that sits more level than on the MT-07, though it raises the seat height by 10 mm to a rather tall 835 mm. 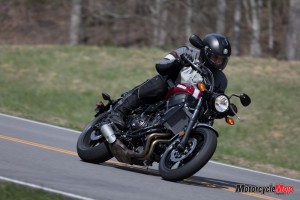 Bolted into the frame is the now familiar liquid-cooled, 689 cc parallel-twin with a 270-degree crankshaft that Yamaha calls a “crossplane concept.” The engine produces 74 hp and 50 ft-lb of peak torque, which is quite strong in its class. That’s about 7 hp more than the Kawasaki Z650, and about on par with the Suzuki SV650X. Despite its high output, the engine runs on regular fuel, and valve service intervals are set at a lengthy 42,000 km.

The riding position is more upright than on the MT-07, with a bit more legroom due to its slightly taller seat. The tall seat does make it a bit of a stretch to reach the ground with both feet flat, but it’s flatter and more supportive than on the MT. Looking down from the seat you’ll find a large, round LCD display that includes a bar-type tachometer, large speedo digits, dual trip meters with fuel reserve countdown and a fuel economy computer, clock, gear-position indicator and ambient temperature gauge. It’s a rather comprehensive display for a bike in this category, and even includes an ECO indicator that lights up at light throttle settings should you need to conserve fuel after the reserve countdown starts counting down. 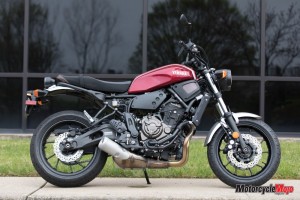 The XSR700 rolls on the same chassis as the MT-07, including the frame and swingarm, which despite being made from steel are very rigid and lightweight. It even shares specs, with rake at 24.5 degrees, trail at 90 mm
and wheelbase at 1,405 mm. The new bodywork has added three kilos compared to the MT-07, tipping the scales at a claimed 186 kg wet. It nonetheless feels very light when lifting it off the side stand, and that lightness remains when you get rolling, returning ultralight steering effort, yet without a hint of twitchiness. The bike exhibits confidence-inspiring stability through high-speed sweepers, but it is also highly flickable through tighter turns, transitioning through a series of bends quickly and with very little effort.

The XSR700 also uses the same suspension components, which are designed more for economy than for high performance. There’s a conventional 41 mm fork and a single, linkage-type shock, with adjustment limited to rear spring preload. Suspension compliance is adequate, though the rear is slightly under-damped, causing the rear to wallow a bit when hitting bumps through high-speed sweepers, though the stiff chassis does keep the bike from weaving. A simple fix would have been to include rebound damping adjustability to the shock, which can’t add all that much cost; I’d rather see Yamaha save a few bucks by installing a simpler instrument panel – maybe even a traditional analogue speedometer – and adding a damping-adjustable shock instead. Despite this, the XSR can handle an elevated, sporting pace, so you won’t have any problems keeping up with sport bikes along winding roads, and this is especially true thanks to the XSR’s remarkably powerful twin.

A Wide Range of Riders

The engine’s 270-degree firing order gives it an attractive V-twin-like drone, and it’s surprisingly robust when twisting the throttle. It pulls very hard for a sub-700 cc twin, with a strong bottom-end punch that starts as low as 2,000 rpm and continues to pound out the torque even as it approaches its 10,000 rpm redline. Despite the engine’s torquey nature, the throttle is easy to modulate, which is a boon for newer riders, but it’s also engaging enough that they’ll continue to enjoy the bike as they gain experience. The engine is so strong it forces you into the seat bolster every time you get back on the throttle hard after a gear change. Want to lift the front wheel in second gear? Just twist the right grip to its stop. A light clutch and shifter provide effortless gear changes, even though rowing through its six-speed gearbox is minimal due to the engine’s wide, flat power band. On the highway, the XSR purrs along mostly vibration-free, with only some light throbbing coming through the seat and handlebar, though the mirrors remain clear.

The brakes, which include ABS, utilize two four-piston calipers and 282 mm discs up front, and a single-piston caliper and 245 mm disc in the rear. Braking power is more than adequate, with moderate, easily modulated pressure needed at the lever for quick stops.

The 2018 Yamaha XSR700 features performance that makes it an unexpected hot rod of a bike, but one that is dressed in modest attire – a sleeper, if you will. More significantly, though, at $9,599, its retro styling comes at a $1,300 premium over the MT-07, which is a considerable increase in cost for altered bodywork. This puts the XSR700 slightly out of reach for someone shopping for a bike in the price range of the Kawasaki Z650 ABS ($7,899) or the Suzuki SV650X ABS ($8,299), both direct competitors of the MT-07. Even the four-cylinder Honda CB650F undercuts the XSR700 by $600. Of course, all of those bikes feature contemporary, angular styling that might not be everyone’s cuppa tea. In that case, paying extra for styling you like might be a small price to pay for a bike you’ll have to look at and appreciate every day.