Whether carving canyon roads or cruising through town, these low-tech bikes do the job very well.

Founded in 1901 in Redditch, England, Royal Enfield began making motorcycles a couple of years before Harley-Davidson. Similar to its American counterpart, Royal Enfield has traded hands over the years, but unlike Harley, which has been in constant operation to this day, the British bike maker closed its plant in the U.K. in 1971. The story doesn’t end there, though, because before that plant closure, in the mid-1950s, the company had licensed a motorcycle manufacturer in India called Madras Motors to assemble Enfield-branded motorcycles for that country’s armed forces. It is this Indian-based company that has evolved into today’s Royal Enfield, now owned by commercial truck maker Eicher Motors.

Several years ago, the company began exporting the Bullet, a 500 cc single with styling derived directly from its ancestral bikes of the 1940s. Unfortunately, it also had a reputation of not staying together very well. Royal Enfield sales have been marginal outside India, and the company wants to change that. It’s banking on the new Continental GT 650 and Interceptor 650 parallel twins to grow its global market share. The bikes will be built on a dedicated assembly line at the Indian plant, and the company has completely overhauled its quality-control process to improve reliability.

A Pair of Twins 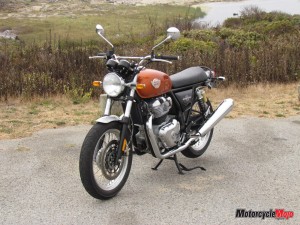 The Interceptor name might be familiar if you grew up around bikes in the 1980s, when Honda had given the name to its VF500, 750 and 1000 V-four sport bikes. You might think Royal Enfield borrowed the name from the Japanese company, but in fact, Royal Enfield had first used the name back in 1960, on the Interceptor 700 twin. The modern Interceptor is styled like a traditional Brit bike with a tall, wide handlebar; a long, flat seat; 13.2-litre teardrop gas tank; and upswept mufflers. Like all proper classic bikes, it also has a centre stand.

The original Continental GT was introduced in 1965; in response to the custom bikes springing up in the U.K. at the time, the company had modified its 250 cc Crusader model to produce the first-ever factory café racer. The new Continental GT 650, which replaces the current single-cylinder Continental, is styled like a café racer, with low clip-ons and rearset foot pegs, and it has a slimmer fuel tank that’s 1.2 litres smaller than on the Interceptor. Aside from those cosmetic differences, chassis geometry, suspension and engine specs are identical between the two machines.

The development of these new twins was a collaborative effort between Royal Enfield’s U.K.-based designers and designers in India. Several of the engineers and test riders who worked on the project are British; some were formerly at Triumph. The main fuel-injection engineer is Japanese and came to Royal Enfield from Suzuki.

One Spec for the World 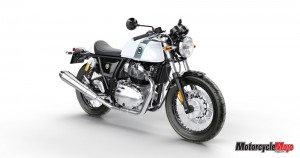 The bikes are simple in design, and there’s nothing on the Royal Enfield engine that is groundbreaking, but there’s an elegance to their simplicity, as well as many benefits. The engine is an air-cooled, 648 cc parallel-twin with a single overhead cam and four valves per cylinder. Output is modest at 47 hp, and torque is rated at 38 ft-lb. To save on development costs, only one specification of bike will be produced for all markets globally, so bikes being shipped to Thailand share the same engine tuning, emissions and chassis specs as Canada. Despite air-cooling, the engine meets Euro 5 emissions standards, and will reportedly meet Euro 6 standards in the future.

The reason the engine was not made larger, like maybe 800 or 900 cc, is that Royal Enfield’s largest market is India, and in India a 350 cc bike is considered a big bike. The company did not want to overwhelm Indian riders moving up from something smaller with too big a step in engine output, and since there is one global spec for the machine, the rest of the world also gets a 650. 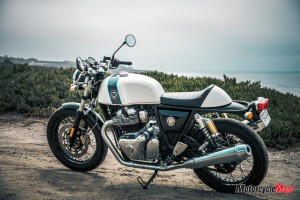 The pistons have a friction-reducing coating, and while the valve train is simple, it’s designed for reliability; the rocker arms incorporate rollers on the cam side and tappet followers on the valve side. These items reduce friction, and thus reduce valve-train wear. Valve adjusters are locknut and screw, so even someone with moderate mechanical skills can adjust the valves at home. A forged crankshaft drives the clutch via a primary gear, which is quieter and lighter than a chain, and is not prone to loosen with time. The clutch is mechanically assisted for light lever effort, and the same mechanism provides the slipper function when decelerating and downshifting.

During the development phase, Royal Enfield built and tested engines with a 180-degree crankpin layout (like Honda’s modern CB500s and Kawasaki’s 400 and 650 cc parallel-
twins), with a 360-degree layout (like the first generation of Triumph’s new Bonneville) and with a 270-degree layout (like current Triumph Bonnies and Yamaha’s MT-07 twins). Test riders unanimously agreed that the 270-degree crank provided the best torque characteristics, with a broad spread of power throughout the rev range, and it also produced the best sound.

Bosch provides the fuel management system, and the engine breathes through Mikuni throttle bodies. Bosch also supplies the ABS, which is standard. The exhaust features double-walled exhaust headers, so the pipes don’t change colour with heat.

The engine is powerful enough to satisfy experienced riders, and tractable enough to make novice riders feel entirely at ease. It also sounds great, emitting a throaty, syncopated rumble. As for reliability, time will tell, but what lies beneath the engine covers is simple and proven, and not particularly prone to failure.

The twin-downtube steel frame is not a marvel of technology, but like everything else on these new twins, it is well executed. It was designed in conjunction with famed U.K.-based chassis builder Harris Performance. The counterbalanced engine is bolted rigidly into the frame, which makes for an unyielding chassis. Chassis geometry is surprisingly sporty, with a 1,400 mm wheelbase, 24 degrees of rake and 105 mm of trail — specs that are very similar to a middleweight supersport machine. A 41 mm conventional fork is non-adjustable, and the twin shocks are adjustable only for preload. Seat height is beginner friendly, at 793 mm for the GT and 804 mm for the Interceptor. The GT weighs 197 kg without fuel, while the Interceptor adds four kilos to that. By comparison, the Triumph Street Twin weighs 198 kg dry. Company president Rudy Singh insists that the new 650 twins are not meant to compete with the Triumph, or with the Ducati Scrambler or any other modern retro bike. “We are not here to take market share away from anyone,” Singh says. “We are here to grow the market.”

The tires are narrow, and 18-inch wheels were chosen to maintain visually appropriate proportions. According to company CEO Siddhartha Lal, modern retro bikes with 17-inch wheels look great, but for a true retro, they “just kind of look off.” Narrow tires also promote neutral steering. After riding the bikes, I cannot find fault with his reasoning. Brembo’s Indian subsidiary, Bybre (BY BREmbo), provides the brakes, which include a 320 mm front disc mated to a twin-piston caliper, and a 240 mm rear disc with a single-piston caliper; brake lines are braided stainless steel. If the name sounds familiar, Bybre also equips KTM and BMW bikes made in India.

We rode both bikes at an international press launch in Santa Cruz, California, beginning the two-day event on the Continental GT, and switching to the Interceptor on the second day, logging more than 200 km on each bike. The mountain and coastal roads varied from smooth to very bumpy, and from sweeping top-gear esses to second-gear hairpin switchbacks.

Regardless which bike was ridden, the lack of vibration was immediately noticeable after pulling away from a stop, and remained vibration-free up to and beyond highway speeds. Clutch pull is beginner-bike light, and the six-speed gearbox is probably the slickest-shifting unit I’ve tried in a long time, with short, solid shifter throws. In 400 km of riding, some of it at elevated speeds, neither bike missed a shift.

Gearing feels tall, with the bottom four gears used to handle most of the tighter roads, though the powerband is wide enough to pull the gearing with ease. Top gear was engaged only at highway speeds, with the engine revving 4,000 rpm at 100 km/h; dropping one gear got me by slower traffic quickly from that speed. The bike cruised effortlessly at 130 km/h. While the narrow Pirelli Phantom Sportscomp tires hark back to the 1980s, they exhibited excellent grip over a variety of paved surfaces, and even on loose gravel.

Whether putting about town or carving canyon roads, throttle modulation is excellent. The engine pulls in a linear manner to redline, and if you’re willing to use the gearbox and let the engine rev, you’ll probably surprise your sportbike-riding buddies on winding roads. Steering is light and neutral, and either bike is very nimble, yet stable at speed. The chassis is surprisingly rigid and forgiving, returning confidence-inspiring feedback even when ridden at an expert-level pace. It’s only at a very fast pace that the Interceptor began to wallow a bit, induced mostly by the tall, wide handlebar and the suspension, which is designed for everyday use and not for knee-dragging frivolity; the Continental did prove a bit more sure-footed thanks to its narrower handlebar. Neither bike did anything surprising, even when hitting relatively big bumps, mid-turn, at high speed. The suspension works remarkably well despite its limited adjustability, revealing its limits only when hitting big, sharp bumps, and despite wearing the tires to the edges, nothing ground out, not even the centre stand.

So far, all seems well with these new twins. About the only hiccup is the dealer network – there are currently only 12 dealers across five provinces. While the plan is to expand the dealership network in North America, it will be demand for the product that determines just how much it will expand. Royal Enfield has no plans to flood North America with new dealers, but rather wants to see who is interested in taking on the brand, and working from there. And according to Lal, interest in the brand is increasing worldwide. “It is the first time that people are knocking on our door and asking about selling our bikes, rather than the other way around,” he says.

Pricing for the Interceptor 650 starts at $7,499, and the Continental GT starts at $7,749. The base price is $1,900 less than the Yamaha XSR700 and almost $3,000 less than the Triumph Street Twin. That is remarkably affordable, and it includes a three-year, unlimited-mileage warranty. There will be a small premium for the custom colours, and a bit more still for a chrome gas tank. In all, 11 colour schemes are available between the two models.

These new bikes will likely represent a paradigm shift for Royal Enfield, and you’ll likely see a lot more of them on the road in the next few years. If you judge these twins by their spec sheets alone, you’ll be missing out. While they are low on frills, what is there is very good. These bikes are charming and they have character, and although those terms are often used to qualify something that has quirks and doesn’t quite work right, these bikes work very well. They offer ease of operation for novice riders, while experienced riders can ride them hard and have fun, and as an added bonus, they look great, too.