Sometimes the best medicine is to just get away and think about life.

Stop me if you’ve heard this one: A guy walks into a doctor’s office, and the doctor says to him, “I’m sorry, you have cancer.” This is the third time I’ve heard a doctor say this to me in 10 years. So, I have to go to my happy place, which means Vancouver Island and a tent.

But I had traded away the mighty V-Strom – after four years of loyal service and some abuse – a bike that would have been perfect for exploring dirt roads and wild camping. Would the new bike (named “Bones,” after my dearly departed mother) be able to cut the mustard on the trip I so badly needed?

Remember Ewan and Charley? They were the ones who convinced the world in Long Way Round that with a true adventure bike (and a large backup crew, and sponsorship, and money), you could have true adventures. So adventure bikes sold like crazy. And many of them never went off pavement. But what about before adventure bikes? Ever hear of Ted Simon and Jupiter’s Travels? In 1973, Simon loaded up his 500 cc Triumph and spent the next four years travelling around the world and having nothing but adventures! 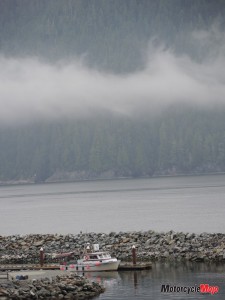 And back in the early 1950s, my then 16-year-old mother (wait, she wasn’t my mother yet!) dated a 20-year-old Frenchman named Leo (scandalous!) who only had a 1947 Harley for transportation. They had all kinds of adventures, most of which she told me while I held my hands over my ears and made “la la la, I can’t hear you” sounds. She was a bit of a maverick, and always wanted me to buy a Harley. So with the advent of the new Softails, last year I honoured her wish and bought a new Heritage Softail Classic 114. The perfect off-road machine. If worst came to worst, I could use the gigantic removable windscreen to signal aircraft for help.

So I loaded it, and loaded it, and finally had enough stuff packed on her to survive a week of non-provincial-park camping. But due to a ferry snafu, my first night of camping on the island was spent in a Nanaimo hotel.

The next morning, it was time to get to some actual camping, but I had noticed the day before that the front end of the bike was wandering a bit and didn’t feel as solid as usual. Being the Knucklehead, I had forgotten one of the cardinal rules of packing up a bike: increase rear suspension preload to compensate for the extra weight! So, with three full turns on the rear shock, we were all solid handling and never bottoming out, even in the worst conditions. We pointed our noses south to look for Highway 18, which would take us west across the island, skimming the bottom of Cowichan Lake. There was supposed to be some good rustic camping in that area.

However, I had set the navigation on my GPS to “Adventurous Routing,” which gets you off the main roads and looks for twisties and more interesting routes. It did a great job, because once through the town of Cowichan, I had no idea where I was.

The GPS was telling me to take a narrow tree-lined road marked with “No exit” signs. At first I hesitated, but then figured, what the hell? and decided to see where we would end up. It turns out that GPS is pretty smart. I think the locals were putting up those signs so visitors would stay off their best roads, because this “No exit” led me to another “No exit” that was equally beautiful, which led me to Pacific Marine Drive. This was one of the nicest rides I have ever taken. Virtually no shoulders on this road, just trees and vegetation, or sheer rock face right up to the edge of the pavement. You could be fooled into thinking you’re in northern Ontario, but then a mountain comes into view. Twists and turns galore, some so sharp they’re marked as low as 20 km/h, but the farther you venture, they just stop marking them, so it’s slow in and fast out, keeping a bit wide for maximum visibility through the blind turns, noting that tandem-trailer logging trucks could be coming the other way.

Logging trucks pulling tandems were a virtual constant on this trip. Riding behind one such rig piled so high with trees that they formed a pyramid at the top, extending higher than the side stakes on the trailer, I was being pelted with bits of bark and small branches. At my first opportunity, I pinned the throttle to get past this behemoth, and the Stage One 114 woke up, sounding like Steve McQueen’s Mustang in Bullitt.

The serpentine road threw everything it could at the new chassis and suspension of the Heritage. This bike can be leaned right over, and even a sizeable bump right before a left-hand hairpin didn’t upset the fully loaded bike enough to cause concern.

All this led me to an old wooden sign for Fairy Lake Campground, and after a long, hot ride, I decided to check it out. A rustic campground of about 30 spots, it looked to be the only sign of civilization on the lake. “Civilization” is used rather loosely here, as there is no drinking water, showers, etc. that you might find in other campgrounds. Just a few post-war pit toilets and a lot of trees. But I got a private spot, right on the shore, with my own little beach. Perfection.

Gator and the Otter 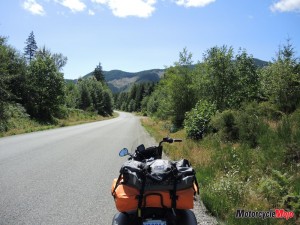 After setting up camp, I decided to explore on foot. I ultimately concluded that I prefer to use my entrenching tool rather than expose myself to the potential health risks hinted at by the incredible odours emanating from the toilets. However, on a more positive note, I did meet Gator.

Gator and Lori have a little compound set up for the season and are paid to act as the campground “hosts.” Though this is not a provincial campground, the province still wants someone around to keep an eye on things, especially as there is no cellular service, so they employ someone like Gator to live there in a trailer, which he got free from a recycling depot. An engaging fellow from New Brunswick, Gator is in his element and has taken a rather eclectic approach to decorating his compound. He and Lori are only there for the summer season, though.

“This whole camp is underwater in the winter. I’ve seen it,” he said. That helped explain the condition of the trail into and around the camp that is a combination of gravel and dirt, and sunken sections too large to be referred to as mere potholes. Fortunately, the loaded Harley tractored through it all without problem.

That evening, an otter and I (Fairy Lake is actually fed by saltwater) enjoyed supper together: me dining on freeze-dried hiker food and he (or she) dining on whatever was below the surface of the water, no more than four metres from where I sat. He (let’s say) dove down amid a boil of bubbles and resurfaced to noisily chew on his supper, watching me the whole time. We chatted amiably. He politely refused a dram of something to take the chill off, and we watched the clouds and silently enjoyed the approach of darkness. Then he was gone, and I was left alone with my thoughts and the beautiful evening sounds of the birds. 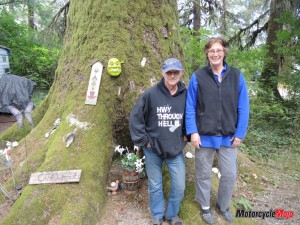 I stayed by the water’s edge until after the bats came out. To my left, a tree-covered mountain shrouded in low-hanging cloud; to my right, a more distant tree-covered mountain, but patches of blue sky letting a few rays of dying sunlight through, and in front, scattered clouds over flatland. A 180-degree view of calm, dark, beautiful lake under a mostly cloudy sky. I stayed until I could see no more.

The next morning I awoke at 3:15, not sleeping well these days. I tried reading. I tried writing. I tried adding more air to my sleeping pad. But nothing worked, so at 5:30 I gave up and decided to strike camp, heed the advice of Gator and move to Lizard Lake, which he had claimed is both larger and nicer.

But first I went for a quick, cold swim in the dawn light. Even with little sleep, that swim woke me up and prepared me for another day.

And then it started to rain – a slow, dreary drizzle that gradually intensified just enough to be annoying. After securing my soggy belongings with a couple of ROK Straps (wonderful things), I headed first to Port Renfrew, less than a half-hour away, in search of breakfast. Bedrizzled, damp and uncomfortable, I tucked into cold eggs Benny and weak coffee. But the server was a gem, the music good (old jazz) and a seat beside the woodstove. Just what one needed to be fortified for a ride in the rain.

Gator was right: Lizard Lake was indeed a nicer lake than Fairy, with perhaps 20 spots. I couldn’t get a campsite on the water, but no matter. That evening I took my small camp chair to the shore for my ritual of sitting, eyes and ears wide open, for as long as the light allowed. A lot can be noticed when sitting quietly by a shoreline with no electronics to distract. Tiny silver fish leaped straight up out of the water as though propelled by springs. Nearby, a large fish rolled on the surface. Nothing intruded into my bubble of tranquility.

The Adventure Winds Down

After a few days, however, it was time to get back to reality. Once again the big Harley was loaded down and made the bumpy, gravelly trip to pavement and pointed homeward. I was following a slow-moving minivan from Alberta, but I was in no hurry, and passing would have been dangerous. Around a bend, a large deer exploded from the underbrush on the left as though shot from a cannon, and was going so fast that it slammed into the rear fender of the van. Stunned, its legs splayed like Bambi on an ice-covered pond, it barely found its feet as I was hard on the brakes with little room to avoid it. Oh, how I wish Harley-Davidson had put a second brake rather than a salad bowl on the front wheel of the Heritage. But we managed to avoid each other, and Bambi went off into the brush on the right side of the road.

John Steinbeck once wrote: “One goes, not so much to see but to tell afterward.” Not this time. There was much to see that I have not told of, but what matters is that I saw it, I breathed it into my lungs, felt it against my skin and, hopefully, locked it into my memory. Because if I ever forget what I saw, heard and felt as the evenings slowly gave way, that will be a great loss.