Triumph’s modern classics — all of the Bonneville-based bikes — are appealing for many reasons. They feature parallel-twin engines, a layout for which Triumph became renowned after introducing it in the late 1930s. Bonnevilles also feature classic Brit-bike styling that pays homage to the company’s earlier twins, bikes that were renowned for their light weight and high performance. After an almost 20-year hiatus, John Bloor brought back the Bonneville name in 2001, after purchasing the ailing company and rebooting it with an entirely new line of motorcycles. 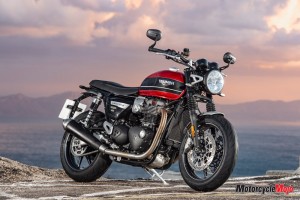 These newer Bonnevilles were completely redesigned in 2016, when they got liquid cooling, ride-by-wire throttle control, ABS, traction control, and improved chassis with better handling; plus, they were significantly lighter than the air-cooled Bonnevilles they replaced. The then newly introduced Street Twin featured more contemporary styling than the more classic silhouettes of the T100 and T120. But, while you could get the T-bikes with two different engines – the base 900 cc twin, and the larger, more powerful 1,200 cc mill – you couldn’t get a Street Twin with more power.

You could opt for the sporty Thruxton if you wanted more power in a sporty package, but its stiff suspension and aggressive, almost supersport-like riding position nixes it as a daily rider. With its more accommodating riding position, all the Street Twin needed to be the ideal retro bike for more experienced riders was more power. It does get 10 hp more for 2019, but that’s not enough to satisfy those with a gluttonous appetite for speed.

Well, Triumph has hit the sweet spot between the Street Twin and Thruxton, with the all-new 2019 Speed Twin, which we rode along the roads winding through the mountains of Mallorca, just off the coast of Spain. 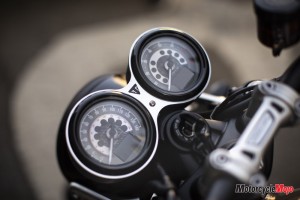 The recipe for more power is simple: The Speed Twin replaces the Street Twin’s 900 cc, five-speed twin with the 1,200 cc, six-speed unit from the bigger Bonnies. But Triumph didn’t just settle for the 79 hp engine of the T120 for the Speed Twin; it instead opted for the 96 hp engine of the Thruxton. Tuning is the same as it is on the Thruxton, and the 270-degree twin puts out a maximum of 83 ft-lb of torque at just 4,950 rpm.

There are, however, some minor changes that distinguish the Speed Twin’s engine from the Thruxton’s, including a magnesium valve cover, lighter engine side covers and a lighter clutch assembly, all changes that drop its weight by 2.5 kg. Like the Thruxton, the Speed Twin gets switchable traction control, and three ride modes – Rain, Road and Sport – each one with progressively more aggressive throttle mapping and TC settings. Maintenance intervals are set at a generous 16,000 km.

The chassis, too, is unique to the Speed Twin. It was developed from the Thruxton R, with a few important changes. Chassis geometry is very similar: the Speed Twin matching the Thruxton R’s 22.8-degree rake and boasting a touch more trail at 93.5 mm (92 mm for the Thruxton). But the Speed Twin has 15 mm more wheelbase, at 1,530 mm, achieved by lengthening the drive chain and pulling the wheel back in the swingarm. This puts a bit more weight over the front wheel, and brings weight bias to an even 50:50. As with all Bonnevilles, the frame is made of steel; however, its removable downtubes are made of aluminum, whereas on the Thruxton they are also made of steel. Unlike the non-R Thruxton, which has floating twin-piston front calipers and solid discs, the Speed Twin has higher-spec Brembo four-piston calipers and floating discs. 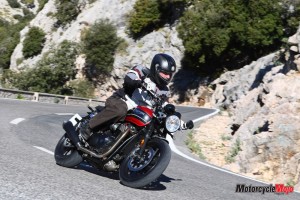 Temperatures in Mallorca were in the mid single digits Celsius when we thumbed the starters at 8:30 in the morning. The Speed Twin returned a rich, throaty exhaust note in the cool, crisp air. Fortunately, our hosts had installed heated grips on the test bikes, a highly recommended addition in Canada, even if they are $330 options. If you find that costly, consider that the bike is prewired to accept them, and the heat level is displayed in the instrument panel. They also have a very clean switch setup, with the switch incorporated neatly into the left grip.

The bike feels surprisingly light when lifting it off the side stand, and seat height is modest at 807 mm, allowing an easy, flat-footed reach to the ground for my 32-inch inseam. This is a tad lower than the Thruxton’s, despite the seat boasting about an inch more foam. A tall, wide, tapered aluminum handlebar places you upright, and the foot pegs are 38 mm farther forward and 4 mm lower than on the Thruxton, providing a more accommodating foothold.

Clutch pull is light, as is nudging the bike into gear. Successive gear changes are light, with short, solid throws. We began the day on open roads, where the Speed Twin chugged along smoothly at 100 km/h, the engine spinning just 3,400 rpm in top gear. Good passing power is available in sixth gear from that speed, but if limited space prompts you to zip by a car quickly, dropping two gears allows you to complete the manoeuvre in a matter of seconds. Torque delivery is broad, and the engine pulls forcefully and without letting up until it hits redline at 7,000 rpm. The broad spread of torque allows you to almost forget the gearbox on winding roads, and the engine accelerates readily from 2,000 rpm whether you’re in second, third or fourth gear.

Almost all recent Triumphs exhibit stellar throttle control, and the Speed Twin is no different. While throttle response at lower speeds in lower gears requires a more delicate right wrist in Sport mode, it remains fluid enough to make the other two ride modes almost redundant. The softer throttle response of Road mode did make handling stop-and-go traffic a bit easier, and I’m sure Rain mode will give riders peace of mind in wet weather, though the bike handled cold, wet pavement just fine in Sport mode, which was my default mode for the day. This is more a testament to the engine’s linear power delivery, though, which makes the bike remarkably easy to ride, and probably so even for novice riders.

The roads surrounding Mallorca are remarkably twisty, with a variety of bends ranging from high-speed sweepers to first-gear switchbacks. The leverage offered by the taller, wider handlebar provides lighter steering than on the clip-on-clad Thruxton, while maintaining unwavering stability at speed. The Speed Twin’s weight reduction has a bigger effect on handling than just the lack of kilos would suggest. Triumph made efforts to reduce inertia – through the lighter clutch, brake discs and wheels – and this makes the Speed Twin especially flickable through esses.

The suspension is essentially from the Thruxton, but tweaked for the Speed Twin: there’s a bit less rear preload and fork oil volume is increased slightly, which allows less air volume for more progressive action through the fork’s travel. Having ridden only the supersport-stiff Thruxton R, I can say that the Speed Twin is certainly not that; its suspension is much more compliant and everyday usable, and not just tuned for riding back roads at a sporty pace. While the suspension is on the firm side, and some adjustability other than the provided rear preload would be welcome, it is nonetheless tuned to handle a broad range of riding conditions, providing excellent control for attacking twisties at speed, while remaining moderately compliant for everything else.

The cold weather did cause concern along the route, particularly in the morning when the roads were damp. In fact, one 5 km stretch of road remained shaded and wet throughout the day, and actually had moss growing on the pavement, its green hue sapping confidence instantly. However, Triumph’s choice of sporty Pirelli Diablo Rosso III radials as OEM tires is commendable, given they displayed remarkably good grip and returned confidence-inspiring feedback. Combined with the traction control, the tires never once slipped on the wet pavement, and that was in Sport mode, which turns down the traction control. Some riders in the group did say they felt the tires lose grip at some point, though that was early in the day, when temperatures were at their lowest.

The seat is firm, yet flat and wide, and it handled a 200 km ride with my backside feeling no worse at the end of the ride than it did at the start. Finally the brakes, which are supported by standard ABS, are two-finger light at the front, with excellent feedback and supersport strong braking power.

The Right Bonneville for You?

Triumph essentially invented the retro bike when it launched the New Bonneville at the beginning of the 21st century, with other manufacturers following suit since then, and creating an entire category with a number of competent, attractive machines to choose from. If you’re in the market for a high-performance retro bike, like maybe a BMW R nineT Pure or Kawasaki Z900RS, the 2019 Triumph Speed Twin certainly deserves a look. Even if you’re looking at Triumph’s own Thruxton because you like its café racer styling, you should still consider the Speed Twin. Just throw on a set of clip-ons and you’ll get the café racer look on a bike that is lighter, and costs less, even with the handlebar change.

You might be sold on the 2019 Speed Twin’s styling alone, with its classic silhouette, and styling touches like brushed-aluminum fenders, forged-aluminum headlight brackets, an unpainted aluminum swingarm, a complete absence of chrome and an overall tidy appearance. But add to that its accommodating riding position and its better-than-Thruxton performance spec sheet, and that should seal the deal.