A mean, green racing machine left its impression on this builder.

Steve Willgoose was 17 when Kawasaki launched its KZ1000R Eddie Lawson Replica in 1982, and he never forgot the first one he saw. 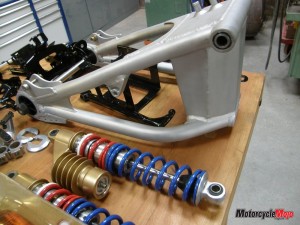 “I was getting into racing, and that was all on two-stroke Yamaha RD350s,” he says. “I was at the track, and a fellow showed up with an Eddie Lawson Replica. They were rare. They were expensive. And to me, it was a big and daunting motorcycle.”

Willgoose is originally from Calgary. He left school at 15 and became a woodworker, but he also had mechanical talent fostered by his early love for dirt biking. After the dirt bikes, he raced two-stroke street bikes on the track. Then, several other larger and faster machines entered his universe. But Willgoose has never been satisfied to keep any one motorcycle for a long period of time.

The S1 itself was something of a replica, as it simulated the Kawasaki motorcycle raced by Eddie Lawson to take the 1981 AMA Superbike Championship. 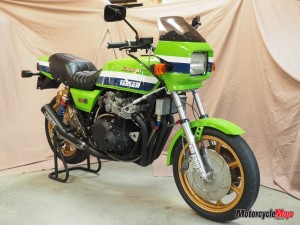 When introduced in 1982, the S1 was a Kawasaki factory race bike sent to the U.S. for AMA Superbike racing, and only 29 were said to have been built. While Willgoose remembers the rare Eddie Lawson Replica from his own racing days, the S1 is an even more uncommon motorcycle, and it’s the one he wanted to recreate.

“My goal was to build a period-correct 1982 KZ1000R S1 race bike in street trim,” Willgoose says. “And that got started with a 1982 Kawasaki GPz1100 restomod I bought out of Ontario. It had been modified with 2008 Kawasaki ZRX parts, such as the forks, brakes and wheels, all scabbed onto it. I got it here and rode it a bit, but soon got to work.”

“Here” for Willgoose is the Sunshine Coast of British Columbia. He relocated there approximately 15 years ago and continues to blend his love for wood and metal. He operates Willgoose Wood and reclaims large logs to mill for live-edge fireplace mantels and slab tables. The table bases are often produced of wood, but just as often he’ll turn to metal to create something a little different.

Because of Willgoose’s affinity for wood, some of the custom parts he makes for his motorcycles are prototyped in the natural material before he advances to crafting the one-off components in metal. We’ll get to an example of that in a few moments. 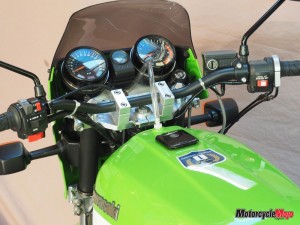 His first decision, though, concerned the wheels. Kawasaki used three-spoke Dymag rims on the S1, but Willgoose preferred the look of seven-spoke Marvic magnesium wheels – an Italian-made reproduction of the Morris mags originally used on Eddie Lawson’s works racing bike. He ordered a set, and then proceeded to strip the bike down to the bare frame. Centre-stand tabs were shaved, and to help stiffen the frame, Jeremy Clement of Venture Fabrication in Gibsons, B.C., fabricated and welded into the lower frame area near the swingarm mounts a pair of triangular-shaped braces.

On the Kawasaki works race bikes, there is a noticeable gap between the rear of the gas tank and the top of the side covers. To recreate that look, Willgoose had Clement fabricate and weld a horseshoe-shaped bracket to the very rear part of the frame’s top tube, where it supports the tank. Willgoose also made up a bung to create a breather for the gas tank and had this welded in place, just in front of the filler lid.

Up front, Willgoose initially installed a stock Kawasaki fork, but soon realized it was too short for the correct look of the race bike. He proceeded to build up new forks, acquiring parts such as reproduction lowers from Japan. The 7.6 cm extended tubes came from Frank’s Forks out of Illinois, while the replica triple tree also came from the U.S. and the rare internal damping rods were sourced from South Africa. To mate the AP Racing calipers to the fork legs, Willgoose prototyped mounting brackets out of wood.

“I cut them out and bolted everything up to see how it all fit,” he says. “Once I was happy with the fit, I got a block of aluminum and had a slot milled in, then I made the holes and cut out the shape on a metal utting bandsaw before doing lots of file work and using an edge sander to make them match my wooden prototypes.”

With the front suspension completed, including fitting a hollow titanium axle to mount the 3.0-18-inch Marvic mag, Willgoose turned his attention to the rear suspension. For this, he’d purchased a handcrafted swingarm from the same seller who had milled up the triple tree. The swingarm was made to accommodate the 4.5-18-inch Marvic wheel, and Willgoose had Sprocket Specialists in Utah machine up a custom final-drive cog. Having searched for months for an original set of Works Performance shocks, Willgoose finally found a pair on eBay, bought them and had them rebuilt by a suspension specialist who’d built shocks for race teams in the 1980s.

The four-cylinder 1,089 cc engine of the GPz Kawasaki had already been modified for performance with a Wiseco big-bore kit, taking it to 1,136 cc. To put his stamp on the powerplant, Willgoose removed the cylinder head and shipped it to Larry Cavanaugh of Cavanaugh Racing Heads in Pennsylvania for larger intake valves, and porting and polishing. Cavanaugh also supplied a set of his race cams. When all the pieces came back, Jason Penner at Penco Motorsports in Sechelt, B.C., installed the head and cam using a special gasket and heavy-duty APE studs and nuts to keep the high-compression engine together. Penner also set the ignition timing.

To match the larger intake ports, Willgoose enlarged the rubber carburetor mounting boots and installed 33 mm Keihin CR carbs. The Kerker exhaust came with the project bike, but Willgoose fabricated correct-looking spring mount tabs, and welder Clement joined them to the header. After hearing about his project, a Kerker representative sent him the correct 1000R collars and springs to mount the exhaust system.

While the engine was out, Willgoose took the time to paint it with a 2,000-degree ceramic coating. He set up a spray booth in his shop and painted not only the engine, but the exhaust system and handlebar controls in the ceramic coating as well.

For its black finish, the frame was sent to Fred’s Autobody & Painting in Sechelt, where Ryan Redman laid down the paint. Redman was also responsible for the bodywork, and priming and painting the gas tank, fairing and tail section. Before the clearcoat was applied, Fred Gower placed the decals.

An attempt was made to rescue the wiring harness that was with the bike, but Willgoose finally bought a new old stock loom from a seller on eBay. A couple of final touches were a custom-made seat cover from the U.K., and the rare side-louvered smoke brake lens came from Japan. The further into the project Willgoose got, the more he obsessed about the build details. Instead of reusing old fasteners, the entire bike was assembled with formed thread titanium studs and bolts. He’s shaved a few pounds off, as the finished bike, with approximately four litres of gasoline in the tank, weighs 226 kg.

It took Willgoose about two years to build, and he’s been doing some fine-tuning. He says as the jetting improves, the Kawasaki continues to become more powerful; he plans to put it on the dyno to get an accurate idea of its performance. Willgoose plans to ride his custom Kawasaki on “nice days,” as well as take it down the quarter-mile drag strip and around the pavement at Mission Raceway on track days.

“It’s a rider, but you’ve got to be careful because it’s a handful, and that’s how I like my bikes,” he says, adding, “They need to have an edge to keep them challenging.”