During an incredibly amazing Leod Escapes international tour with track time through the Spanish Pyrenees, our group of 15 motorcyclists had the opportunity to ride the famous MotoGP Circuit MotorLand Aragon for two incredibly exciting days. 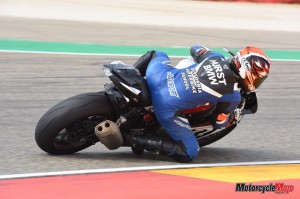 These weren’t typical track days either – Leod Escapes clients were joining the Race Academy School for two days of instruction from none other than two-time World Superbike Champion Troy Corser! For me it was a challenge, after 14-plus years of coaching with the California Superbike School (CSS), to put aside my teaching hat and be a student once again.

The Race Academy has a fleet of 2018 BMW S1000RRs, the same bikes we use at CSS, and I was assigned bike 31 and given permission to start in Race mode instead of the usual Sport. I was put in a group with Eskil as my instructor and two other riders, not part of our Leod group, who were assumed to be of similar speed and skill level as me.

The day began with an overview of track rules and flags, followed by a briefing session with Eskil that consisted of going over the track map and points of reference. Then, we rolled out onto the track. 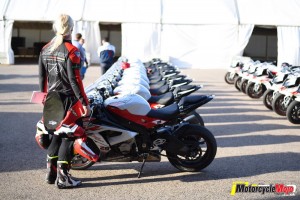 Aragon! Wide and fast, with many technical and blind corners that also challenged the eyes with colourful curbing in red, yellow and green. I followed my instructor for most of the first session just trying to make out the finer details of the track.

Our first tech briefing was on throttle steering, using the throttle to control the line; the second briefing, delivered by Corser, was all about vision, loosely covering such topics as picking out reference points and looking ahead to your next point. The format of the day: seminar, ride, debrief with instructor (often with video footage), and repeat.

On the third track-riding session, while I was just beginning to learn the tricky circuit, Corser blasted by, giving the “follow me” signal, so I rolled on the gas in an attempt to match the pace he apparently believed I was capable of. His hand gestures were strict and deliberate: “Move over!” he seemed to be shouting. “Follow me exactly on this line,” his hands demanded.

Training by a Master

“I’m trying!” I wanted to scream back as I altered my lines attempting to do exactly as shown. While his hands dictated where I should be on the track, they were also simultaneously announcing what gear I was supposed to be in – four fingers, three fingers, two fingers! It was all I could do to try and keep up, but there I was, slightly star struck following Troy Corser around Aragon in Spain! In the end, he dragged me along nearly three seconds faster than my previous time, a 2:17 on my third session ever at that track.

Corser is the kind of guy who doesn’t mince words and says it as it is. “Yeah, you go quick,” he said after, “but your body position needs work. You also have to use the index and middle finger for braking instead of the middle and ring,” he said wiggling his two fingers in my face. “Power and feel,” he said, almost smirking, “or you’ll never master trail braking.”

He also suggested that I do a session as a passenger on the back of his bike with him. “You’ll learn more in three laps on the back with me than in all the seminars I can give you.” Yeah, not happening, I thought to myself. Nothing sounded more terrifying than a pillion ride. Nope.

For the last two sessions, we worked on body and foot positioning, trying to sit closer to the tank, hips and thighs jammed in tight, heels on the pegs, legs out. This proved excessively difficult for me, but I did my best to be a good student and found some usefulness in the position, for certain corners, in certain situations.

That night, while dining and drinking in a large, medieval banquet hall with all my riding companions – now close friends – I re-evaluated my fear of riding pillion with Corser. I’m in Spain, I thought to myself, and Troy Corser is offering me a ride on the back of his bike. I damn well better take it!

The next morning, during the first riding session, with shaking hands and trembling from head to toe, I climbed on the back of his bike. “Trust me,” he said. “You’ll be able to feel for yourself. Really, really feel what the bike and I are doing.”

As we took off around the track, with me gripping the custom handle attached to the tank, I tried to follow his instructions – look up track, hold tight but not too tight, remain relaxed.

I held my breath as we turned into the “corkscrew” much earlier, way faster and carrying a longer, slower, straighter line into the coloured apex than I would have figured. I could feel the weight of both of us on the bike, and yet I could also feel the unwavering grip of the front tire, stable as we braked into the apex, turned quickly, braked hard and deep again before rocketing out and accelerating so hard that a quiet squeal of terror erupted from my lips. I completed two full laps without making a sound audible enough for Corser to have heard, a feat I was quite proud of even while he rode the entire back straight in sixth gear on one wheel until we approached Turn 1, when the bike pitched sideways as he slid the rear, leaving a long black darkie, and I couldn’t help but scream, “SH*T F*CK F*CK F*CK F*CK!!!” He roared out of Turn 1 after a rider had dared to pass and he hunted him down, I think forgetting that I was on the back, and passing him and others so closely I could have touched them.

When we pulled off the track, Corser laughed at my trembling hands and the profanities he had heard me shouting, but he also said, “You were a really good passenger! I could hardly feel you behind me. You were like a little backpack.” And henceforth I was referred to as “Backpack” for the remainder of the tour.

The next two seminars were on engine braking and gears, and trail braking, and it’s here that I got the most pertinent information for improving my own riding. Corser discussed how late and very hard braking causes the rear to get light and too much weight to be transferred to the front tire, inhibiting steering and challenging traction. He taught us about how downshifting – often much earlier than you think you can – and braking “sooner, softer, longer” helps create more overall grip.

When you downshift sooner, you use the engine for braking and the chain force helps to pull the rear tire down, evening out the weight distribution on the tires, smoothing everything out and maintaining the most possible grip. His physical demonstration of a rider waiting to brake late, grabbing a fistful, having the rear tire get light, even lifting off the ground, and struggling to keep weight off the bars was pretty much a direct mimic of how I used to race so many years ago.
In the session after riding pillion, I took a full three seconds off my “regular (not being dragged along by Corser) time, and then another three more after the engine-braking seminar for my best time of 2:13.2. I was able to put a few new techniques together and gain a new-found confidence in front tire grip because I understood it better, and also had a chance to actually feel it working.

All in all, it was a great experience to shed the teaching role and be a student once again. And of course it was a super-badass experience to ride the insane track of Aragon with a World Champion as my coach!