Sometimes a cool place to chill while on a ride is all you need.

You know when you go into a motorcycle shop and they have a bunch of motorcycles, motorcycle parts and motorcycle gear, and you’re happy? That’s a good thing.

But what if there were motorcycle shops that had a bunch of motorcycles, motorcycle parts and motorcycle gear — but they also had a little somethin’ extra? Something beyond just the usual motorcycle stuff? Wouldn’t that be an even better thing? I believe I just heard you say “Yes!”

Well, in the general vicinity of Motorcycle Mojo’s Practically Secret West Coast Research and Development Laboratory (MMPSWCRDL, which just rolls off the tongue…) there are such shops. And the proprietors of such shops will actually allow me to enter the premises, and will occasionally talk to me. And so I’m going to write about them.

Exhibit A is Class6cycles in North Vancouver (class6cycles.com). Owner Colin Yarrow only works on older, carbureted bikes. The oldest bike he’s worked on in his shop was a ’38 Harley-Davidson, so he definitely knows his vintage stuff. He does maintenance, repairs and restorations on anything old, no matter the brand. When I visited he had a ’70 Triumph 650 chopper that had last been ridden in 2013, a ’62 BSA Super Rocket, ’82 Honda CB900, an XS650, and even an old Yamaha XS1100 with an original Vetter Windjammer fairing, all in for various types of work. Everything from “just get it running” to restoration work. The BSA in particular has a bit of an interesting story.

This Project Needed a Kick Start 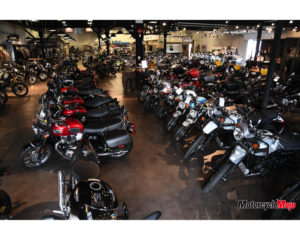 The BSA was to be a father/son project. Apparently, the dad had run one back in the day, while living in England, and had always wanted another. Once the son grew up, in Vancouver, they decided to find one in decent condition so dad would teach his son how to restore and work on it. They went all the way to England to get this one and bring the BSA back. Sadly, before the work could be done and knowledge could be passed along between the generations, the father passed away. Now, the son asked Colin to do the work that his father didn’t get the chance to complete. “It is a sad story” says Colin, “but I’m glad that I can do the work so that he can enjoy it and keep the memory of his dad going.”

And as if that isn’t enough to make his shop interesting, Colin also has a mini museum of interesting bikes that anyone…