Three Canadian builders produce what they think is the ultimate R18 “winter project”.

It was the most unexpected meeting of minds. On one side of the table, there was me, a 64-year-old curmudgeonly old scribe whose nostalgia for period-piece choppers turned out to be a lot more remarkable than he remembered. On the other was baby-faced Nick, a fledgling bike-builder who, in the eyes of this 64-year-old curmudgeonly bike journalist, didn’t look a single day older than 17. One was wearing a 40-year-old Timex — they really do keep on ticking — the other was wearing a nose ring. I’ll give you only one guess as to who was wearing what.

And yet, there we sat, discussing old choppers like it was the ’60s, the Electra Glide had just been upgraded to the Shovelhead and wasn’t it just yesterday that Sonny Barger, the head of the Hells Angels, had his famed falling out with Mick Jagger? Nick showed me a video of a classic ’55 single-carb BSA stretched with an impossibly long girder and ape hangers that would make Peter Fonda proud. I countered with photos of my wall of Easy Rider mags. Yet another example of the miracle of motorcycling: were we to pass each other on the street, neither of us would likely give the other a second glance.

The miracle in this case was BMW’s presentation of three Canadian-built customs based on its R18 retro cruiser. Launched to much fanfare in 2020, the humongous BMW has wowed the critics, but has slipped into something of a post-pandemic malaise. With no dealer test rides, and no bike shows, it has yet — despite BMW’s commitment to various models and aftermarket accessories — to cement itself into the Canadian custom zeitgeist. 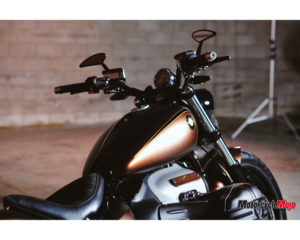 Hence the decision to launch an R18 “winter project” build-off. With a modest budget — and an impossibly tight two and a half months to craft, sculpt and weld — Johann von Balluseck, BMW Canada’s new director of motorrad, commissioned Rob Thiessen, Jay Donovan and, of course, Nick Acosta to build the way-raddest R18s in the land.

That the three creations share not a single custom part, paint swatch or even the slightest resemblance of a common motif should hardly be surprising. Rob, if you don’t know him, is the former owner of the Lucky 51 Hot Rod Cycles custom shop and now the general manager of marketing and customization powerhouse Konquer — 30,000 square feet of online shopping warehouse and bike fettling. Nick, meanwhile, works out of an 1,100 square foot garage in downtown Toronto while Jay’s workshop is his parents’ converted barn in that Silicon Valley of motorcycle customizers, Victoria, British Columbia (and I really do hope that everyone’s catching that as sarcasm).