Triumph ups its game in the big-bore adventure-touring forum, and its competitors should be wary.

Let’s face it: big-bore adventure bikes rarely get ridden off road, not hard anyway. For the most part, the toughest terrain such bikes will see is gravel, and that’s fine. Sure, there’s a small percentage of riders who will take their BMW R1250GS, KTM 1290 Super Adventure or Yamaha Super Ténéré on challenging off-road rides, or even wander onto some single track — and, with the right skillset, those bikes can do remarkable things on dirt. But their size and weight still make them a handful. You can always opt for a middleweight, like the F850GS, 890 Adventure or Ténéré 700, which can handle deep-wood excursions almost like a true dual-sport. But then you’d be making a compromise in long-distance comfort and convenience if the majority of your trips include loading up the bike or carrying a passenger when hitting the pavement.

Triumph seems to have hit the sweet spot with the redesigned 2023 Tiger 1200, producing a big adventure bike that has tons of power and space for two-up touring, yet is almost as manageable off-road as a middleweight machine. There are five models to choose from (see sidebar), split into two families: the road-oriented Tiger 1200 GT (base GT, Pro and Explorer) and the off-road-oriented Tiger 1200 Rally (Pro and Explorer). Among other differences, the GTs have cast 19-and 18-inch wheels, while the Rally models get tubeless spoked 21- and 18-inch wheels. The Tiger 1200 Rally is unique in that it is the only adventure bike on the market with a shaft drive and a 21/18-inch wheel combo.

A New Engine and Frame 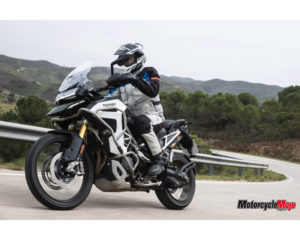 The Tiger 1200 gets a revised inline-triple with a new displacement. While the new engine shares the same bore and stroke as the latest Speed Triple (90 x 60.7 mm), and now displaces the same 1,160 cc (down from 1,215 cc), it is not the same engine. The big difference is a new firing order, derived from what Triumph calls a T-plane crankshaft.

Introduced in the Tiger 900, its crankpins are spaced unevenly, at 180-270-270 degrees, versus the conventional 120-120-120 degrees of the Speed Triple and the previous Tiger 1200. This gives the new Tiger a distinct V-twin-like rumble, and boosts bottom-end power while maintaining power through the midrange and top end. Compression ratio has been bumped to 13.2:1 from 11.0:1, yet the bike still requires only regular fuel. It also makes a bit more power than the previous Tiger 1200, at 148 hp and 96 ft-lb of torque, up from 139 hp and 90 ft-lb.

A new, lighter frame now has a removable…