The V4 Pikes Peak is an adventure-touring bike that thinks it’s a sportbike.

It’s all a bit incongruous when you think about it.

Ducati’s Multistrada, were you to attempt to pigeon-hole its purpose, is an adventure bike. Which, when you think about it, is a touring bike that is based on dirt bike technology. Hence, they wear 19-inch front rims (or 21-inchers when the pretense is taken to its logical ends), have ginormously wide handlebars and suspension travel that I would have died to have on the Suzuki RMs that used to bust my nuts on motocross tracks so many years ago.
Then, if you’re Ducati, you take that basic dirt-bike/touring bike premise and throw it completely for a loop, squeezing enormously wide 17-inch rims into the front fork and rear swingarm. Next, you jettison all that motocrossian suspension travel, chop down the touring fairing and lower the handlebar until it feels very much like what we old-timers used to call a superbike bend. Then, you head out to the twistiest mountain road in America, win a (now-cancelled) prestigious hill climb and call the end result Pikes Peak.

For those not following along this engineering archeology, the 2022 Multistrada V4 Pikes Peak is essentially a road racer built out of an adventure tourer that is based on dirt bike technology. If that’s not the definition of incongruous — the word means “inconsistent within itself,” according to Merriam-Webster — then all those years I spent studying the classics were well and truly wasted. 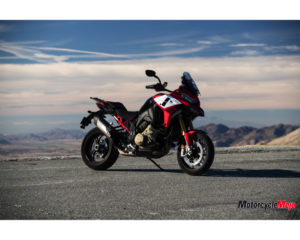 Nonetheless, it’s truly amazing how well something so seemingly discordant can work when a company as crafty as Ducati turns its Panigale engineers on something already as sporty as the Multistrada. That’s because, unlike Pikes Peak’s past, there’s more to the 2022 version than just the substitution of a racy 17-inch front wheel for the standard 19-incher. For one thing, the 1,158 cc V4, though internally similar, dances to a slightly different drummer.

Besides more modes — there’s a “Race” mode that’s unavailable on lesser versions of the Multistrada — a more liberal rev limiter allows more over-rev so you don’t get as much wheel hop when downshifting at high revs, a High Power mode offers even more direct throttle response than available in the standard V4S and the quickshifter — standard on the Pikes Peak — is tuned for even faster shifting. Oh, and Ducati throws in an Akropovic pipe. Because it has to meet OEM noise limitations, it’s not quite as fruity as the aftermarket versions that the storied Slovakia brand makes for various Dukes. And, no, meeting those same noise regs, it also doesn’t increase the power any — the Pikes Peak, umm, peaks at the same 170-hp. But its titanium construction does contribute to the Pikes Peak’s reduction of 4.4 kilograms compared with the V4S.

Nonetheless, the most obvious indicator of the seriousness of the Ducati’s sporting intentions is that it is the first…