Sometimes, when a wrench gets thrown in your plans, you have to pivot and create the next best thing.

Plans change, and it’s important to remain open to all options. Essentially, that’s how this custom 1974/1979 Yamaha XS650, built by Kevin Bergeron, came to life.

The Bonneville Salt Flats have long inspired land speed racers to test their tuning and engineering skills. In 2019, Alberta-based firefighter, paramedic and custom motorcycle builder Bergeron challenged himself to create a machine for the salt. Thinking a Yamaha XS650 parallel-twin engine would provide a strong heart for a racer, he started searching for one.

“I originally was after just an XS650 engine,” Bergeron says. “But after I’d had my eyes peeled for a long time I found a package listed on Kijiji that included a bike with a Mike’s XS big bore-kitted engine and a bone stock engine included in the deal. I thought the big bore engine could be fun for the flats.” 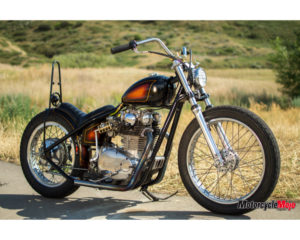 The bored-out engine from 1974 was bolted into a frame of 1979 vintage that had been cut and chopped. That stock engine was out of the ’79 frame. With a project in hand, Bergeron was making plans for his salt flats build when the pandemic closed the border. He held off on the land speed racer and changed direction early in 2021.

“In the summer of 2020, I moved from Calgary to Lethbridge,” he says. “I’ve built several custom KLR250s, but my friends down here all have Harley-Davidsons, and I wanted something larger to ride on the highway that I could build on a budget. That XS project looked more and more like I already had a good start.”
Bergeron appreciates the lower, shorter, and smaller build philosophy ascribed to by many in the Japanese custom bike scene. Starting on March 21 of 2021, he rather ambitiously set a goal of having a custom “short chop” Yamaha on the road in two months, right in time for the start of the riding season.

The first item of business for Bergeron was sorting out which of the two XS650 motors he’d use. He opened up both and found that the ’74, with the big bore kit, was not in good condition, while the stock ’79 powerplant showed very little evidence of wear. He put the ’79 engine aside for the salt flats bike he still intends to build, and focused on resurrecting the big bore mill for his custom.

Working in his garage, Bergeron put the 1979 XS650 frame in a jig and used a grinder with a cut-off disk to remove the rear subframe and swingarm mount. With rear axle plates from Voodoo Vintage, Bergeron bent and TIG-welded together new frame tubes and created a rigid frame that dropped the Yamaha three inches and…