Adventure riding for me has always been an indulgence in solitude. Getting off the grid and under the radar. Exploring where curiosity leads, and stopping where I find an invisible place to wild camp. So when friends suggested a group ride, I felt a moment’s hesitation: This would require cooperation, compromise, and not being the main character in my own show.

I had met Gary online. He was selling and I was buying a throttle lock. Gary then introduced me to Cliff, a friend who shared his passion for all things mechanical. In fact, they have since become invaluable to me on that front, willing and patient teachers both. For my part, I like to think I have reciprocated with some of my experience from a few years of moto travel.

As a celebration of his retirement, Gary had his sights set on riding the Labrador Highway and Newfoundland, but plans had to be shelved when Covid-19 began a global trip of its own, and we began to consider routes closer to home. That’s when we locked on the north shore of Lake Superior, the largest freshwater lake in the world. (Its volume is significantly greater than all the other Great Lakes combined; in fact, it is so large, it has a six centimetre tide.) Our plans included lots of hand sanitizer, and, of course, masks, and we would camp and keep to ourselves as much as possible. Our only real fear was reprisal from overzealous locals — a fear that was never realized.

Getting on the Road 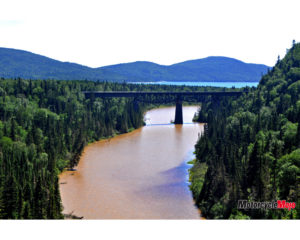 Weather was a perfect 26 C as the four of us (Gary’s son Collin joined) blasted our way along the 400-series highways through Toronto and into the sparsely populated regions beyond Sudbury. After the obligatory photo in front of the Big Nickel (Sudbury was once a world player in nickel and copper mining), we stopped for the night in Chutes Provincial Park, where we got the last available campsite — for $72 — and we vowed to find cheaper private campgrounds hereafter.

Cliff, in particular, was relieved the next morning to be navigating the smaller roads leading through tiny towns, with populations between 600 to 1,000. While Gary and I rode 650 Suzuki V-Stroms (2011 and 2006 respectively), and Collin a Kawasaki KLR650 (2003), only Cliff on his Suzuki DR650 (2018) struggled with the powerful winds and speeds above 110 km/h. A high-speed wobble had even once or twice put an added thrill in his adventure. The roads henceforth would be much more to his liking.

We stopped in Echo Bay for another…