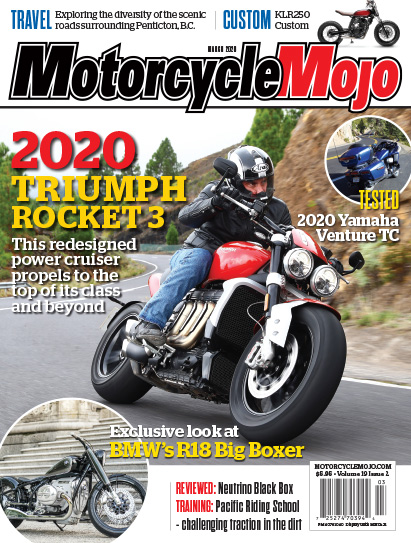 Triumph Motorcycles recently showcased its 2020 Rocket 3 R and GT at a press launch in Tenerife, Canary Islands, and Costa Mouzouris brings you his first impressions of these two power cruisers. He was expecting the massive amounts of horsepower and torque that the huge 2,500 cc in-line three-cylinder engine produces, but was most impressed at how well the updated Rocket 3 handles serpentine roads.

We also include a report from Jamie Elvidge, who tested Yamaha’s 2020 Venture TC in the canyons and highways of Southern California. In addition to the Venture TC’s remarkable touring comfort and storage, it also handles low-speed manoeuvres quite well for such a large bike. But as she observes, the big touring bike isn’t without its weaknesses.

Our travel feature this issue is of the Penticton, B.C., area. This beautiful city became Emily Roberts’ home base for a multi-day motorcycle ride and she was thoroughly impressed with the diversity of terrain and scenery that the Southern Interior of B.C. offers.

On the custom front, Greg Williams takes a look at a build by a hobby motorcycle customizer who transformed a tired 1994 Kawasaki KLR250 into a modern road burner that looks like it would be way too much fun to ride on the streets.

David G. Williams takes a look at a few backyard builders. They aren’t mechanics or professional builders, but they do have a desire to create or modify a motorcycle of their own and proudly ride it down the road.

All this and so much more in this issue of Motorcycle Mojo magazine.