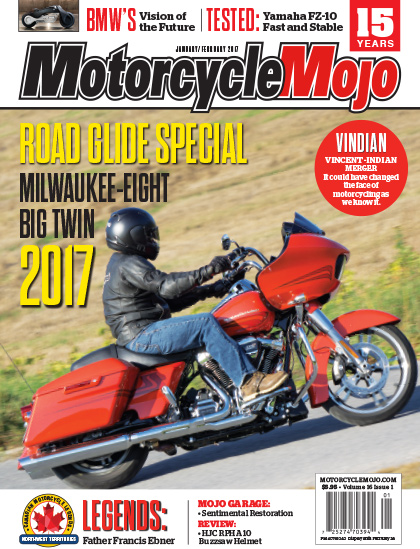 This January/February 2017 issue of Motorcycle Mojo marks our 15th year of publication, and we’d like to start it off by saying thank you to all of our subscribers, supporters and advertisers. We couldn’t have done it without you!
To ring in this New Year, we’re featuring tests of two 2017 models from opposite ends of the spectrum.
The 2017 Harley-Davidson Road Glide Special with it’s all new Milwaukee-Eight powerplant is handed the touring torch, ushering in a new era for the Motor Company.
By Comparison, Yamaha’s approach to 2017 has a more menacing facade, namely that of its R1 superbike-derived streetfighter, the FZ-10. Hang on or it will leave you behind!
Alan Cathcart unravels the story behind a little known, and unlikely, marriage that almost changed the history of motorcycling. Allow us to introduce to you the Vindian.
This issue, Our Canadian Legends series looks at the Northwest Territories and it’s unforgettable “motorcycle missionary” Father Francis Ebner.
In the world of travel, Ron Keys is forced to rethink his opinion of riding in Texas as he explores the states Hill Country and discovers a motorcycle mecca.
Vintage is all the rage and for good reason. You can’t tell us a modern motocrosser has anywhere near the mechanical appeal of this 1953 Matchless G80CS, that’s still tearing up tracks in Alberta.
We also take a look into the future with coverage from BMW’s Vision Next 100 event in Los Angeles, where Costa Mouzouris got a glimpse at the future of personal transportation.
Then in Lifestyle, April Weavell sits down with three female motorcyclists to discuss their passion for the hobby and the various paths that are bringing more and more women to motorcycling.
All this plus our regular columns, sections and much more, can be found in the January/February 2017 issue of Motorcycle Mojo.